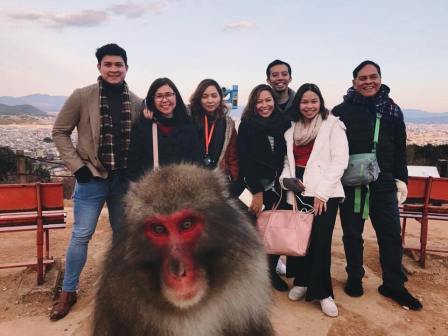 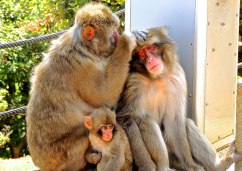 [We were told that the reason why the faces of those macaque monkeys are RED is because they are thin-skinned on their faces and the redness is caused by the large number of blood-carrying small capillaries on the monkeys’ faces. Our group photo at LEFT was expertly snapped by one of the caretakers while one macaque monkey was staring at him. ] 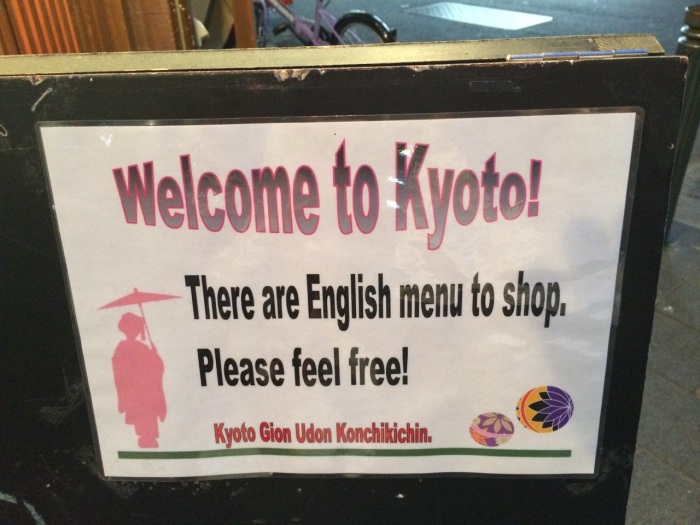 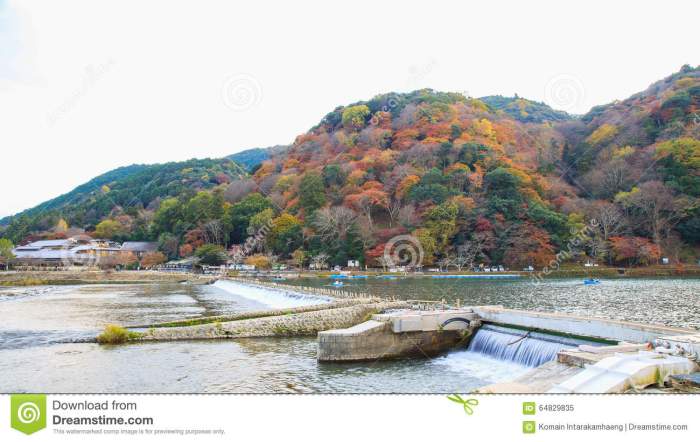 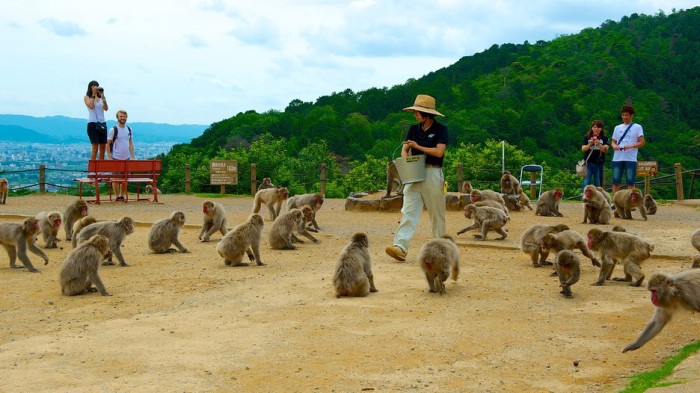 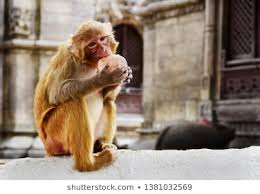 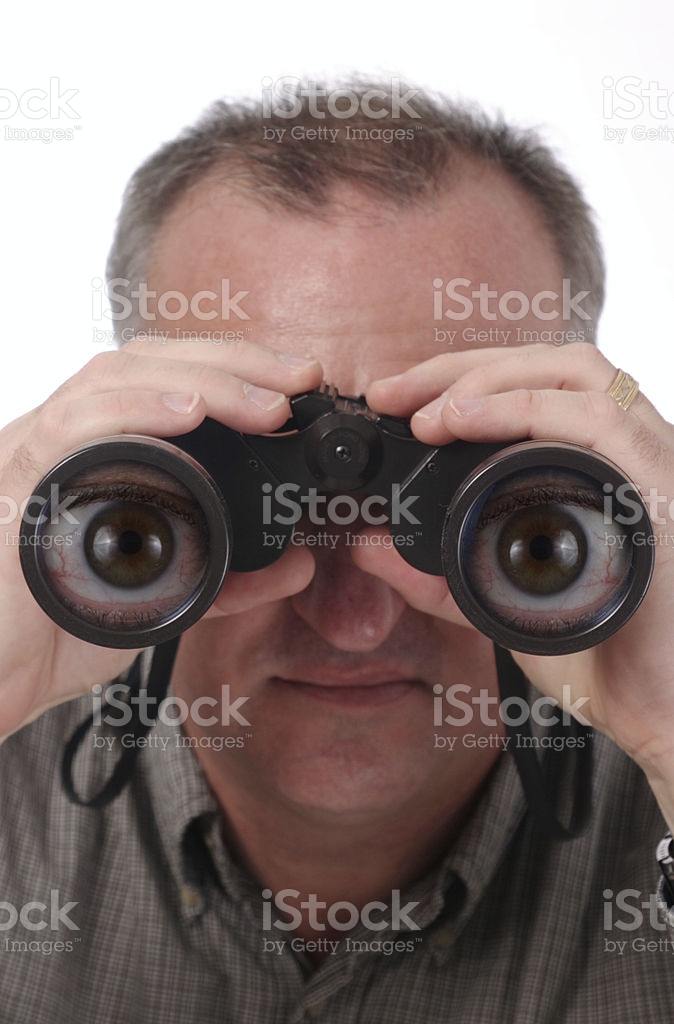 [From atop MOUNT ARASHIYAMA where the IWATAYAMA MONKEY PARK is located, you can take a photo of the panoramic view of this part of KYOTO, JAPAN. ]

[Legend: 1 – Mount ARASHIYAMA – The Japanese word: “Arashiyama” actually means  Storm Mountain. Arashiyama is actually a district on the western outskirts of Kyoto, Japan. It also refers to the mountain across the Ōi River, which forms a backdrop to the district. Arashiyama is a nationally designated Historic Site and Place of Scenic Beauty.

2 – KUATRO is a Tagalog term which was inherited from the Spanish language and which means – FOUR or in this case, specifically FOUR O’CLOCK.

3 – The WALK UP or the TREK up to the mountain top by way of a trail would normally take about 20-25 minutes. But the TELLER at the COUNTER suggested that we do the WALK UP faster so that we could enjoy more the time spent with the macaque monkeys.

4 – PARK is the IWATAYAMA MONKEY PARK which is atop Mount Arashiyama where 120 to 170 macaque monkeys call as their HOME. The gate to the PARK at the foot of Mount Arashiyama is about a 5-minute walk from the ARASHIYAMA Train station, during which walk you can pass by and see the Hozu River along with quaint houses and shops lining the riverside leading to Mount Arashiyama. Once you reach the entrance, you will pass through a traditional torii gate and see a peaceful shrine located near the entryway.

4a – The MACAQUE MONKEYS (/məˈkɑːk/) constitute a genus (MACACA) of Old World monkeys of the subfamily Cercopithecinae. The 23 species of macaques are widespread over the Old World, especially Asia. Macaques are principally frugivorous (i.e. feeding on fruits), although their diet also includes seeds, leaves, flowers, and tree bark, and some, such as the crab-eating macaque, subsist on a diet of invertebrates and occasionally small vertebrates. All macaque social groups are arranged around dominant, matriarchal females.

5  – PUYAT means “sleepless” as I usually experience difficulty to fall into slumber or deep sleep in a hotel on my first night until I have acclimatized myself into its ambience.

5a – TRIP is actually an English word which has however acquired a Tagalog slang meaning of some kind of “fondness” or “liking”. The MACAQUE MONKEYS have varied “likings”; as some would just want to stay and sort of “roost” on the branches of trees, others would be running and prancing about at the large frontage area adjoining the feeding house, etc.

6 – MONKEY HOUSEBOY – I used this term to refer to a monkey who would do the task of picking head lice or some kind of fleas upon another monkey as though the monkey doing the picking is some kind of a servant to the master monkey whose head is being cleared of lice.

7 – Naka DESTINO – Some of the MACAQUE MONKEYS are there hanging on the chicken wire which covers the southern side of the feeding house. And those who would want to feed the monkeys hanging on to the chicken wire must buy a pack of feeds (i.e. either a pack of unshelled raw peanuts or slices of apple) and give it to the monkeys by placing the “feed” onto the palm of their hands. Guests are warned not to give the “feeds” through the fingers as it must be offered lying on the palm of one’s hand.

8 –   LARGABISTA is Tagalog term for BINOCULARS.

10 – Before the PARK closed when we were there on December 18, 2017; the caretakers fed the troop of monkeys by strewing bunches of what looked like chestnuts, on the ground fronting the FEEDING HOUSE. And almost all of the monkeys would scramble for the chestnuts on the ground.

11 – IWATAYAMA is the name of the MONKEY PARK atop Mount Arashiyama.

12 – WORK OUT; the hike and walk up unto the top of Mount Arashiyama that we did was an arduous and vigorous and laborious task as we were all trying to catch up as the PARK was almost to close already at 5:00 PM.

13 – The caretakers at the PARK (i.e. actually THREE (3) of them: TWO (2) males and ONE (1) female) were always on the GO as it was conveyed to us, as they closed the PARK, that there is one MONKEY who is so aggressive, bad and a bit ferocious; and that they are always on the look-out as they would try to shoo this monkey out of the range of visitors and guests taking photos of the monkeys around.]