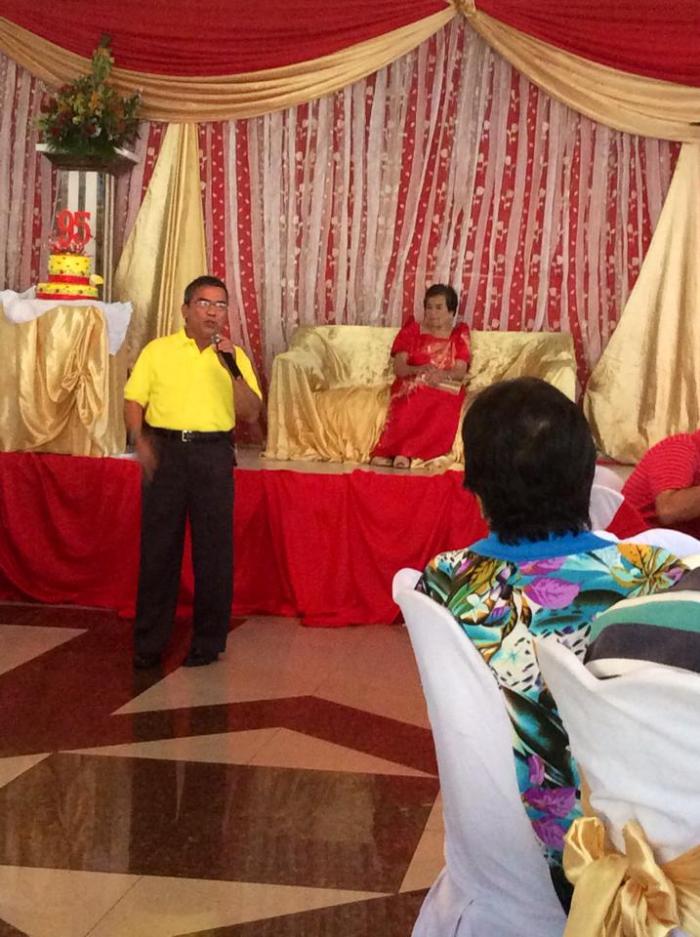 [At around 10:30 AM today (November 23, 2016), our only living aunt from my maternal side, LOLITA D. TOBIAS (whom we have endearing called as our TIA LOLING), reunited with our DIVINE CREATOR after a tragic bout with pneumonia. She was 96 years old and would have turned 97 by next year on March 24, 2017. During her 95th birthday celebration held at the ASIA BLOOM RESTAURANT in Santa Cruz, Laguna; on March 29, 2015, I presented to her a Tagalog poem which I caused to be printed on TARPAULIN and which served as the central backdrop of the buffet table during her birthday celebration. I also recited the poem which recitation, she relished with fondness and gusto. I am PRINTING the Tagalog poem as a BLOG to memorialize the genuine love which Tia LOLING has displayed and showered her kin especially her children and grandchildren. Photo above shows, Kuya Raul (an Aglipayan Bishop), Tia Loling’s 6th child, as he delivered his welcome remarks during Tia Loling’s 95th birthday celebration. Shown at the background of the photo, dressed in an elegantly sewn red gown is our Tia Loling who appeared as though a mere septuagenarian in her looks, gestures and speech. She surprised us all when a grandchild, Karlo, serenaded her with Tia Loling’s favorite song and when Karlo missed the lyrics and the lines, Tia Loling came to Karlo’s rescue by “coaching” him with the song’s lyrics and its melodious lines. For those who have been touched during all those wonderful years of Tia Loling’s life on earth, please say a little prayer for the eternal repose of her good and charming soul.]