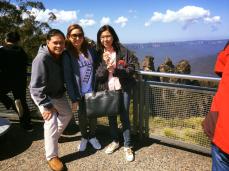 Truly, the BLUE MOUNTAINS is one of the most majestic scenery in Sydney. The appellation BLUE Mountains, which pertain to the mountain range which sort of envelopes/encloses the Jamison Valley got its name according to what I heard from the phenomenon that happens every day usually at near dusk. It is said at dusk, the emanating vapors from the vast bunches of eucalyptus trees planted in the depths of the Jamison Valley (underneath the ECHO point, which serves as the viewing deck for one to behold the majesty of the Blue Mountains) would form a bluish color haze and that it would gradually turn the color of the mountains from green to BLUE.

It is apparent though that even if it is still not yet dusk,  the farthest mountain ranges from the observation deck at the ECHO Point would actually look BLUE already.

The Blue Mountains is a mountainous region and a mountain range located in New South Wales, Australia. The region borders on Sydney’s metropolitan area, its foothills starting about 50 kilometers west of the state capital. The public’s understanding of the extent of the Blue Mountains is varied, as it forms only part of an extensive mountainous area associated with the Great Dividing Range. Officially the Blue Mountains region is bounded by the Nepean and Hawkesbury rivers in the east, the Coxs River and Lake Burragorang to the west and south, and the Wolgan and Colo rivers to the north. Geologically, it is situated in the central parts of the Sydney Basin.

The Blue Mountains Range is a popular tourist destination and is ideal for rock climbers, mountain bikers and hikers. Those who are interested to do rock climbing and hiking ventures are well catered for by guiding companies and equipment stores located mainly in Ketoomba.

Mountain biking takes place mainly on the many fire trails that branch away from the main spine of the Great Western Highway, such as Narrow Neck, and Anderson’s Fire Trail. Likewise many of the fire trails are popular with day hikers, though many dedicated walking trails exist away from the fire roads.

Canyoning in the Blue Mountains is a popular sport and caters for various skill levels. Canyoning actually is some kind of sports which is done by travelling in canyons using a variety of techniques that may include other outdoor activities such as walking, scrambling, climbing, jumping, rappelling, rafting and swimming. It carries inherent dangers, yet for those with the appropriate skills or those looking to take a guided trip there are many great opportunities to experience a different view of the Blue Mountains.

Also, there are numerous rappelling (i.e. roping down sports) options available in the Blue Mountains Range including single and multi-pitch routes. There are some restrictions however, with respect to certain areas which have been closed for rappelling. 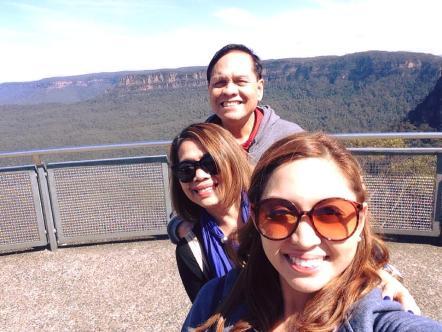