[The THREE (3) gracious and most helpful ladies that made the LEGIT STATUS HIPHOP DANCE TEAM’s stay at their ROOTY HILL HOME in Sydney, NSW most convenient, comfortable and NUTRIFYING. CANDICE GALVAN aka CANDY at the foreground; to her right is her MAGNANIMOUS MOM, CELY aka ARACELI LLORCA and at near background, to CELY’s right is CHARMY aka CLARISSE MAUNG.  Photo was taken when CHARMY and CANDY treated their MOM CELY to a movie during CELY’s recent birthday.]

Cely is my other lovely maternal first cousin who has for years been based in Sydney, NSW; while Charmy and Candy are her daughters; and therefore, my nieces. And I just want to commend these three (3) gracious ladies for the help they purveyed unto my daughter’s (i.e. Alee’s) Legit Status Hiphop Dance Team (“LS Team”).

The LS Team which competed at the 2016 World Supremacy Battlegrounds-Hiphop Contest (Varsity Division) [“WSB”] in Sydney, Australia; eleven (11) of them plus their coach Vimi Rivera (“Vimi”) and their team manager and my eldest daughter Shayna Young (“Shayna”), actually got billeted in the Rooty Hill home of my maternal cousin, Araceli Llorca aka Cely aka Sally Beckham.

Earlier, the beauteous Beth Llorca Lever, the elder sister of Cely, was able to close a deal for the rental of a commodious house situated near the Mount Pritchard Mounties Club (venue of the WSB contest], except that the house-owner eventually got a surprise arrival of her kin’s family which would need commodious lodging accommodations too.

Finally, as we, my family which includes myself, my wife Dang and my two (2) other children; Tonton and Cheska, were all scheduled to stay at Beth’s Oxley Park home; it was decided that the LS Team members plus Vimi and Shayna, be quartered instead at the Rooty Hill home. The cemented driveway leading to Cely’s Rooty Hill home got transformed into the LS Team’s transitory rehearsal venue

Upon arrival from the Philippines (via an 8 hour Cebu-Pacific plane ride), our group which included the LS Team  and my family partook of a Filipino-cuisine lunch of SINIGANG NA BABOY, BISTEK TAGALOG and fragrant steamed white rice at Cely’s Rooty Hill home.

About the LS Team’s hospitable hosts, namely: CELY, and her two (2) daughters CHARMY and CANDY,  have been long-time residents of Aussie. Cely is a beauty therapist and is doing part-time geriatric care to people living in high-end areas in Sydney. On the other hand, Charmy (being the eldest daughter of Cely) who is now married to Phillip Maung, actually lives separately with her hubby and is on the family way with her first child. And the proverbial stork is expected to come on January 26, 2017 coinciding with Australia Day.

Candy, standing up to her hospitality-consciousness by reason of her being a Cruise Consultant virtually served as BIG SISTER, together with her Ate Charmy; to the members of the LS Team, even cooking and churning night snack-foods for them such as pastries and cakes (i.e. M & M cookie  bars, chocolate rocky road cake, etc.). In Candy’s recent post in her FB account, she mentioned having missed the LS Team as she imagined herself having a lot of brothers and sisters during the LS Team’s stay in their home. Candy with her BF, the winsome Gilby Gaynilo, loves going to Aussie’s beaches and hiking. In fact, they have come up with an Instagram account called “hikeunamatata” which journalizes their various hiking experiences in colorful photos displaying Aussie’s rural and bucolic  locale in its pristine and natural beauty.

Charmy who despite being recently wed to her handsome hubby Phillip Maung (who is Burmese) and pregnant even, took time to help the Rooty Hill household just as to make the Legit Status Team’s stay convenient, comfortable and nutrifying. Charmy works with the Australian Military Bank   and that as her share in the seeming nutrification regimen for the LS Team, Charmy would churn out specially baked cheese dips and nutella pizza. Charmy excitedly recounted too that every time the LS Team would do their practice dances at the driveway at the Rooty Hill home, she would be so mesmerized by the dance movements as she would fantasize and imagine herself (while watching) to have become a hiphop dancer too during her teens.

During our brief stint in Sydney especially at Sydney’s city, I felt so cosmopolitan…for this, I want to thank CELY, CHARMY and CANDY…..SALAMAT… THANKS… MERCI…GRACIAS….KYAAYYJUUTAINPARTAAL (that is Burmese, I think for THANK YOU)… 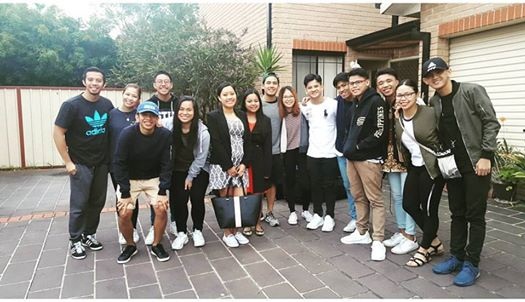 [This was Candy’s post in her FB account which came as caption to this photo: “Feels so weird coming home to an empty house. For the past week, me and my Mom played host to my cousins from Philippines and their lovely Legit Status dance crew. It was nice feeling like I had so many brothers and sisters. I enjoyed cooking for you guys late night snacks. Hopefully see you all again, next year! Miss you already!” —Charmy and Candy are shown in this photo (i.e. 6th and 7th from L-R, respectively) with the whole Legit Status Team which competed at WSB.]