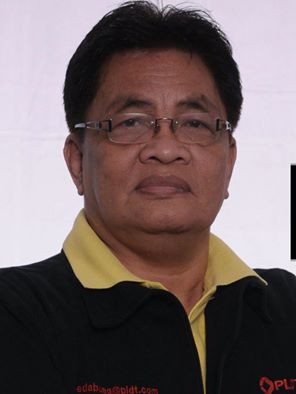 [Photo shows my friend Ed Abueg, who was a former Supervisor at the PLDT, in a stern and somber pose. In actual life however, Ed was very comical and entertaining. Every time we hold our bingo socials in our K-Ville community, to raise some funds; he would invariably be assigned as the bingo-number barker. And as he would call out the numbers, he would intersperse his spiels with amusing ribald jokes that would bring about hilarious laughter.]

In 1993-1994 when our small community, the K-Ville Townhomes compound located in Sanville Subdivision, Tandang Sora, Quezon City; got continuously rocked by on-and-off spats between neighbors who literally fought for their respective parking slots, ED ABUEG was elected as President of the K-Ville Townhomes Homeowners’ Association, Inc. (“KVTHA”).

What actually took the cake was the case of an arrogant/boorish American who rented a unit in the middle part of K-Ville, and who was driving a large American-made car almost looking like a limousine with a lengthened wheelbase. Every time he would diagonally park his car in a manner that would straddle unto two (2) parking slots, the whole cluster in the neighborhood got stirred up like a hornet’s nest, as everyone in the cluster would be up in arms against this Gringo. The Gringo was tall, and burly and was sporting a hirsute chest. Though everyone in the cluster was gritting their teeth in anger, each one of them was cautious not to create something that could literally explode into some kind of a gang-war.

Indeed, the American who surely would fit the label of the pejorative GRINGO would from time to time bring in some of his equally burly compatriots as their guests in K-Ville.  To solve this problem, which could grow into some kind of cataclysm, it was decided that all the male members of the K-Ville Board then, would together talk to him [we were about EIGHT (8) in number that time] as we could at least project some kind of authority that could perhaps make the American obedient to the then simple but helpful parking rules. The foregoing was considering that early efforts to call the attention of the American was either ignored or repelled by an annoying grunt. As ED was the Prexy, we the male members of the K-Ville Board, with ED at the forefront, together with some other residents, decided to troop to the American’s unit, people-power style. As expected, the boorishness/arrogance of the American held sway.

However, not to be outdone, after a virtual shouting match, a usual aftermath when you confront an arrogant fellow; ED made and came about with something that transformed the American into something as meek as a lamb.   And, as directed and planned, all of us were one in our act of casting piercing dagger looks upon the GRINGO when the confrontation happened. After a couple of months, the American and his family moved out of K-Ville. If my memory serves me right, the former American’s unit was near Ady Yazon’s unit (i.e. Unit No. 107) where a row of parking slots is located. And ED, who got labeled with the sobriquet PARKING SYSTEM CZAR,  thereafter became so passionate in delineating the parking slots of each and every unit owner from then on. In fact, he personally supervised the first visible marking of the slots by PAINT,  stamping the correlative unit numbers on the parking slots in the townhomes community.

At the wake at the St. Peter Funeral House along Quezon Avenue in Quezon City, as ED during his prime was an acknowledged ladies’ man; I was almost tempted to joke and tell Elvie, ED’s widow: “WALANDYO, SI ED TALAGANG LADIES’ MAN AH…KAHIT NA  PUMANAW NA, GUSTO PA RIN EH MARAMING KATABING CHICKS…AT ST.PETER PA ANG PINILI NA KATABING-KATABI NG PEGASUS!” [English translation: “What a joy, ED really is a true ladies’ man…even though he is now dead, he really likes to be near damsels and dames…and he chose St. Peter Funeral Homes which adjoins PEGASUS***”. ED passed away on May 28, 2016 and his remains were cremated on June 2, 2016.  Farewell Pareng ED!

[***PEGASUS which is located along Quezon Avenue in Quezon City, is one of Manila metropolis’ favorite and famous night-club bar and restaurant which prides itself with the most beautiful and sexiest female guest relations officers and bar hostesses.]

[Left photo shows the marquee-signage of PEGASUS, a high-class resto bar, which signage is easily visible in the day time. At the extreme right portion of the photo is another signage which looks as though hanging from the electric post which is within the premises of the nearby St. Peter Chapel where my late friend’s (i.e. Ed Abueg) funeral wake was held. Right photo shows the facade of PEGASUS twinkling with inviting lights at night.]