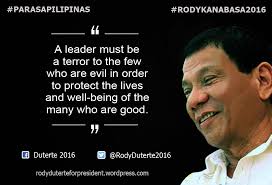 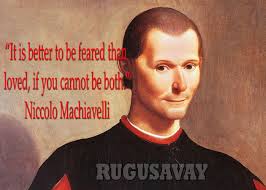 [Left panel shows President-elect Rodrigo Duterte’s photo juxtaposed with the quotation which reads as follows: “A LEADER MUST BE A TERROR TO THE FEW WHO ARE EVIL IN ORDER TO PROTECT THE LIVES AND WELL-BEING OF THE MANY WHO ARE GOOD.” At right panel is the portrait of Italian philosopher Niccolo Machiavelli with his quote collocated to his right which reads: “IT IS BETTER TO BE FEARED THAN LOVED, IF YOU CANNOT BE BOTH.”]

Niccolo Machiavelli once said that: “It is better to be feared than loved, if you cannot be both.”

Perhaps, the foregoing has emerged as the apt catch-phrase, albeit the exemplar slogan of President-elect Rody Duterte (“Pres. Rody”) as he enters the threshold of his providential Presidency.

Some among those who portray Pres. Rody as uncouth and so plebeian in his ways, cannot accept the fact that with his 16 Million win as the new President of the Philippine Republic, Pres. Rody has  already earned the mandate of the people. By proving their point, these doubting thomases  would quickly do the calculation and would state with seeming confidence and pluck, that at 16 million votes, Pres. Rody does not yet possess the majority vote that would entitle him to arrogate power as the country’s chief executive. This perception is clearly not tenable as there is no constitutional provision that requires a majority vote to become President.

By way of laying the premise to some kind of parallelism, English historian Lord Acton (1834–1902), in his famous observation on power, concluded that: “great men are almost always pictured as bad men”; and, in identifying with a personality which is most apt to be put up as paragon of leadership in an Asian setting, it ought to be  Mao Tse Tung.

Mao Tse Tung was a romantic visionary who set himself with seemingly impossible goals. But, Mao had the necessary qualities of leadership, persistence, and ruthlessness to reach them. Mao was uncouth who lacked personal polish, even criticized as a dictator, and who was almost always vulgar in his choice of words, and (even in his declining years) overly enjoyed the company of women.

What Mao did which has brought her much closer to the hearts of the masses in Red China, was his dream and initial but crucial efforts to modernize China and his similar efforts to remove the elite in Chinese society.

On the other hand, Pres. Rody has vowed to modernize the Philippines with his determined push for a stronger and more robust steel industry. Though, he may be uncouth and vulgar, it is with a very essential cause. It is because Pres. Rody has pledged his life to fight crime and corruption as he had in fact earned the reputation of being a crime-buster especially when it comes to drugs and acts of fraud and debauchery in government and that he has similarly vowed to stop all kinds of oppression against the Filipino people.

And it could be Pres. Rody’s  perception that it is required, for him to achieve his committed goals to put up a fearful image to instill trepidation and dread among the criminal and malevolent elements of society.

Deepak Chopra, an Indian-American author and prominent advocate of the NEW AGE MOVEMENT, listed a number of positives when a leader goes tough and ruthless, and here is his list:  toughness provides sharper focus; the leader quickly knows who is an ally and who is an enemy;  intimidation can be used as a competitive tactic; if people fear you, they will respect you; weaker people will submit to the leader’s will; time is not wasted making friends as what counts are the results; the leader will be labeled as a winner; and the leader would not have guilty feelings  about hurting others, as it is war, after all.

Amidst this interplay of historical facets and the riveting electoral contest that has just passed, let us all now stop in prayer for Pres. Rody’s success. As his success will be the nation’s success. Let us all therefore supplicate God’s intervention and intercession for guidance and blessing that Pres. Rody’s unintended efforts to displace and unsettle the elite would not be taken to mean as a rebuff to those members of the elite who have remained to be cooperative, righteous and upright members of our society. With this, we would rightfully be giving hope and inspiration to the lowly members of our society who have identified with Pres. Rody (who invariably refers to himself as “trabajante sa gobyerno” aka “government worker”) as they feel oneness for their being similarly uncouth, unwashed, plebeian, and more so, for being proletarian.