According to TRANSPARENCY INTERNATIONAL: “Bribes and backroom deals don’t just steal resources from the most vulnerable – they undermine justice and economic development, and destroy public trust in government and leaders.” 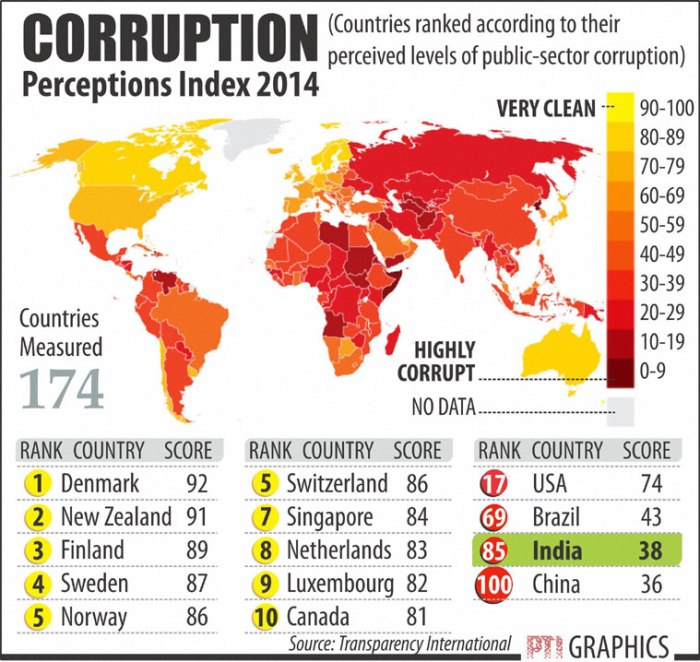 In their 2014 study, Transparency International gave the Philippines a score of 38 with North Korea and Somalia tied at the top position with both scoring a perfect “1”. It is noteworthy that the Philippines scored a 34 in 2012, then a 36 in 2013; and by 2014 it leaped to 38. Well, it sounds and looks, that the Philippines is improving bit by bit in its anti-corruption campaign.

Though corruption is indeed still flagrant in our country, I still believe that with the advocacy of the present administration towards that trek into the “matuwid na daan”[English translation: “STRAIGHT PATH”], corruption would eventually diminish or perhaps someday, it would become a thing of the past, a double “perhaps”. The front-runner of the Presidential polls, Grace Poe, who argued that the Liberal Party does not enjoy the monopoly to advocate the “matuwid na daan” program virtually hinted that she will push through with an aspiration of a corrupt-free Philippines. And that is a very good indication! 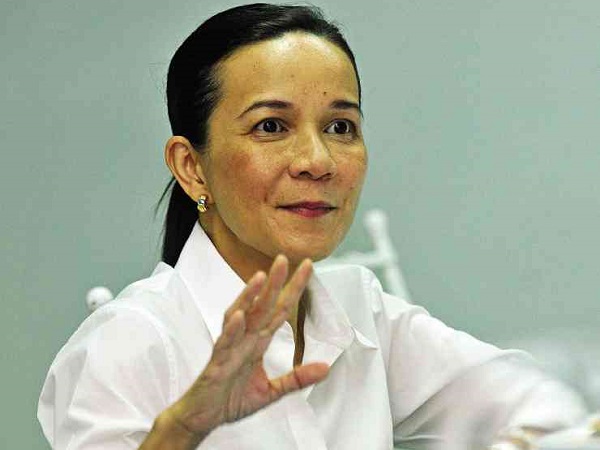 In February of 2009, I was tasked by my father-in-law, Tony S. Evangelista, Chairman and CEO of the New Kanlaon Construction, Inc. (“NKCI”), to accompany NKCI’s President and COO, Rolly S. Narciso,  to Algeria to negotiate a contract with a Japanese contractor which was awarded a 200 kilometer road-building project. NKCI was keen at inking a manpower service contract whereby NKCI would supply Filipino skilled workers to Algeria. I was so excited to reach Algeria as Algiers, its capital, seems to be shrouded with magic and mystery and is commonly referred to as the favorite locale for spy-thriller books.

I and my good friend Rolly flew in from London’s Heathrow airport into Algeria, after flying in from the Philippines via Cathay Pacific.

When we arrived at the airport in Algiers, we never saw any signage about the supposed need to totally declare the amount of foreign exchange you are bringing into the country. As we have to take another domestic flight from Algiers to Annaba, and that we have to transfer to another terminal, we rushed and walked double time to avoid being late in the domestic flight check-in process. 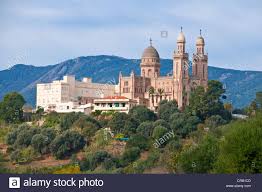 The flight from Algiers to Annaba aboard a small plane took us about an hour and a half. But what was unusual, was that when I and Rolly checked in our luggage at the Algiers airport, it did not go straight to the plane’s cargo hold. All of the luggage were collected, lumped together as though a heap of sand from afar as we have to walk through a relatively lengthy stretch of the tarmac to reach the  plane. And as you take your turn to climb the mobile stairway, you have to pick up your own luggage and lug it as you climb the mobile stairway. I learned unofficially thereafter (as there was heightened alert level in the airport) that it was some kind of security measure to supposedly avoid a luggage with a bomb planted in it, into the plane’s cargo hold. Understandably, the airport authorities were purportedly wary that someone would check in a “bomb-laden” luggage, avoid the trip and BOOM! 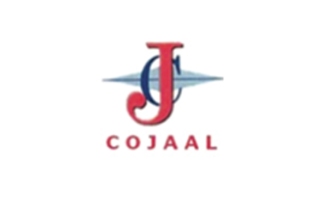 At the COJAAL Camp ( COJAAL stands for Consortium Japonais pour Algeria with Kajima, a Japanese construction firm, in the lead) after going through a marathon of daily negotiations, with a Japanese engineer, whom I remember is named Engr. Hatta together with his peers in K’bouda somewhere in the middle of Algeria, the contract was successfully crafted and polished.

Then, after successfully getting the contract signed, and while preparing for our trip back home to the Philippines, our Japanese host warned us against bringing back to the Philippines, notes or coins of Algerian’s currency. As I was excited to bring home some Algerian notes, I hid at the bottom of my carry-on luggage some pieces of Algerian notes. But our Japanese host forgot to tell us about the need to declare foreign currency being brought into Algeria. 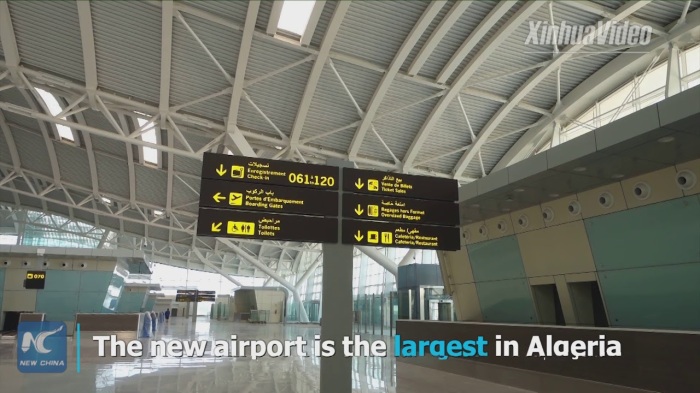 So, when we were passing through Immigration at the airport in Algiers on our way back home, the Immigration Officer who looked like Saddam Hussein, surprisingly asked for my wallet. Thinking that the Immigration Officer would just be looking for Algerian currency ensconced in my wallet, I voluntarily gave my wallet. While the Algerian officer was checking on my wallet, and descrying the wad of American dollars inside, as we barely spent the money given us as allowance for our Japanese host took care of all our expense,  he said: “Monsieur, you are carrying a lot of American dollars, did you declare this when you entered Algeria, Monsieur?” 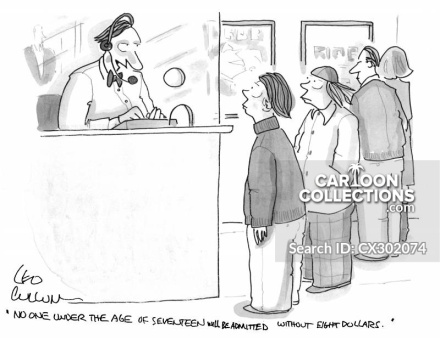 “No one under the age of seventeen will be admitted without eight dollars.” 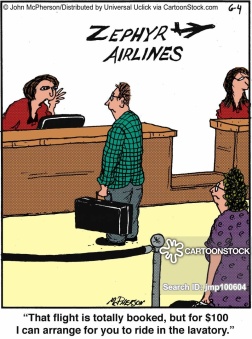 ‘That flight is totally booked, but for $100 I can arrange for you to ride in the lavatory.’

When I retorted that I was not told that it needs to be declared as there was no signage at the airport when I arrived, the Algerian officer boomed out in a dreadful manner: “Monsieur, you are committing a grave violation of Algerian law!”

Thereafter, as I was already feeling hot under my collar, and as I was becoming somewhat rattled too; the Algerian officer told me: “Monsieur, wait a little while as I will have to report this matter to my chief.”

As I waited and was turning fidgety, while those after me in the queue were passing through the Immigration without any hassle (most of them Algerians though), I asked the Algerian officer as to how many minutes more do I still have to wait. But, the Algerian officer just gave me a curt reply: “Monsieur, just wait!”

After a couple of minutes more, and as there was no more queue, the Algerian officer turned to me and said: “Monsieur, are you Filipinen?”

And when I answered in the affirmative, the Algerian officer snickered a smile and said: “Monsieur, you know Algerienne and Filipinen… they are comrades…anyway, I will just help you and I will not report this matter anymore to my chief…give me your wallet again Monsieur so that you can now proceed.”

As I felt some sigh of relief, I readily gave once again my wallet and that Algerian officer, without any word, just picked out two (2) crisp 100 dollar bills and told me: “Monsieur, you can go now!”

Though I was a little bit shocked to have witnessed the audacious Algerian act, I was still able to blurt out a meek “thank you” to the Algerian officer.

Thereafter, I thought and said that it still is better in the Philippines for at the airport, Philippine airport officers still would display some courtesy of asking for some largesse and/or tip…but in Algeria, they take the money direct from your own wallet themselves.

But after wondering why Rolly was snapped up with 300 US dollars, while only 200 US dollars from me; I remembered that Rolly was actually scrimping on his dollars, actually never spending a dime. And the Algerian might have seen the dollars in his wallet was much thicker while mine was thinner. 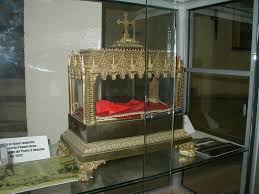 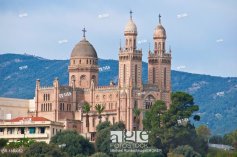 POSTSCRIPT: What was exciting about our Algerian trip was neither the thought of having seen Algiers, as the venue of top selling spy-thriller novels; nor the interaction had with the Algerian officer, but the visit I had in a Catholic Church which is the Basilica of Saint Augustine in Annaba (formerly named Hippo) in Algeria where his relic, part of the remains of St. Augustine, who was born in Algeria (actually his arm bones were made part of his statue featured at the altar) could be venerated. The Basilica however is now more of a museum than a place for worship, as Algeria is a predominantly Muslim country now, about 99 per cent of the population.