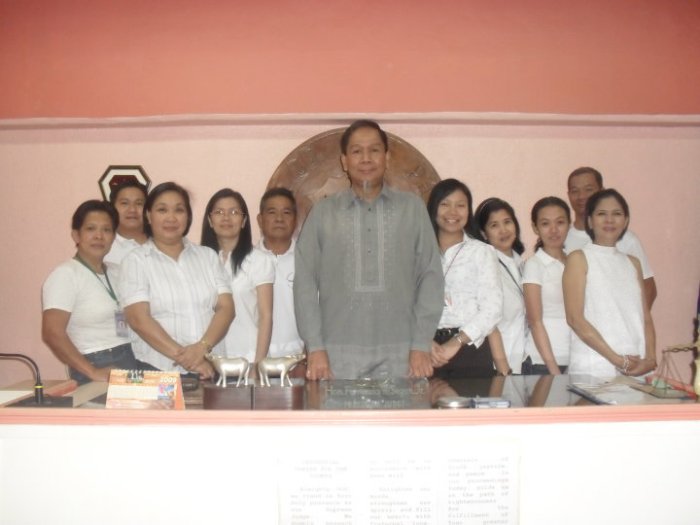 [His HONOR, Judge FERNANDO T. SAGUN, Jr., is shown here in a group photo with his staff at the Regional Trial Court of Quezon City (Branch 78). Judge Sagun sports a very unique and peculiar kind of beard which is blond, long, thin and wispy; which I now label as the “SAGUN BEARD”.  More power to you Judge SAGUN!]

That’s one of his most easily discernible TRAIT…

He is so simple and so very MODEST;

Actually saw him once riding on a tricycle SEAT!

He lives within our NEIGHBORDHOOD,

And he truly has a homely MOOD…

Saw him once even watering their front yard PLANT…

As though a green-thumbed gardener in some ornamental STAND!

Has professionalized and re-formalized our notarial PRACTICE,

Insured that lawyers are guided by truth and JUSTICE;

He impressed me as circumspect and so SYSTEMATIC,

His decisions show that his skills as ANALYTIC!

As a CANCER person, he has a strong creative STREAK;

Has great intellectual abilities too, making his tasks as easy as CAKE…

He weighs the reactions of people AROUND,

His charity and kindness truly ABOUND!

GOAT is the zodiac animal associated with HIM,

The element for his GOAT symbol is the Wood YIN;

Perhaps, it would be good at the LOTTO to fall in LINE!

As and by way of a health ADVICE,

Dealing with stress, you ought to be WISE…

You must keep a proper schedule for SLEEP;

To insure that your slumber will truly be DEEP!

As recognition of his leadership SKILL,

Was appointed as EJ, to among others spin the WHEEL…

As before, assignment via raffle of cases was DONE —

Now it’s electronic, no more wheel that needs to be SPUN!

He is known to be a bit STRICT…

At the HALL OF JUSTICE, he started to do a RESTRICT;

To maintain respect unto the courts of LAW,

Attire must be formal, just as was said in a SAW!

As a majestic magistrate in our CITY,

He ought to be honored in some CEREMONY;

His public-servant posture as an industrious and fair JUDGE…

Will truly help to de-clog the judicial HODGE-PODGE!

[Here’s a photo of Judge SAGUN with his staff and his staff’s family member at RTC, Quezon City (Branch 78);  snapped during of the court’s Christmas parties!]