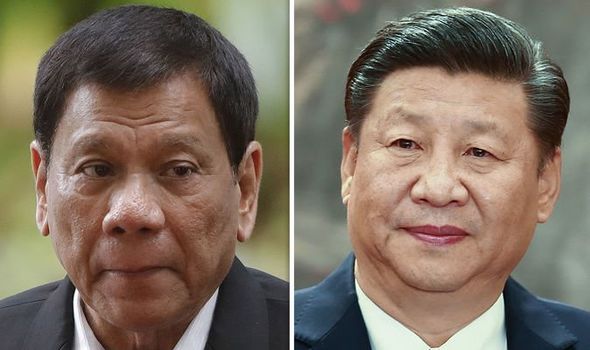 [The friendly relationship between CHINA and the PHILIPPINES must be nurtured, further developed and vibrantly promoted amidst the auspicious prospect of a GLOBALLY-BENEFICENT DEUTERIUM EXPLORATION PROJECT that will bring the Philippines to the highest economic level and bring to the world an alternative fuel source that is clean and environment-friendly.]

As the trend is now towards GLOBALIZATION;

JOINT COOPERATION is a much better WAY!

Indeed, we ought now to think of what’s good for HUMANITY,

Let’s not sound selfish by accentuating about “OUR COUNTRY”…

The motto and precept must now be “OUR WORLD”;

A contrary stance could bring us the SCOURGE!

The PHILIPPINES is destined to be truly GREAT,

With the vast DEUTERIUM deposits that we’ll EXCRETE;

But we do not have the FUNDS and TECHNOLOGY,

CHINA is near, and we both can bring GLOBAL PROSPERITY!

As DEUTERIUM  can’t be found in any OCCIDENTAL…

Let’s ward off JOINT EXPLORATION with the U.S.;

As America’s WARMONGERING stance has been creating much MESS!

But it actually is a form of fuel that is very much CLEANER;

DEUTERIUM  is  known as the “White Gold”  in our COUNTRY,

It’s found in the  Philippine Deep and not in any other TERRITORY!

DEUTERIUM is a natural source of ENERGY,

The Philippine Deep has much to power the world till ETERNITY;

That’s the reason why states are fighting for a foothold in our COUNTRY,

That means the Philippines is on its way to much PROSPERITY!

With GLOBALIZATION as the only DIRECTION,

Territorial bounds must now have no DIMENSION;

We ought now not to think PAROCHIAL…

Thinking must now be focused into what is GLOBAL!

For what is done in a GLOBAL SCALE INDEED….

Will benefit HUMANITY and it now must be our CREED;

Let’s not look and focus on the territorial BOUNDARIES,

Let’s now work for the GLOBAL WORLD in our respective DUNGAREES!

DUTERTE’s election is part of the PLAN,

Thwarting the U.S. from treating us like a BONDSMAN;

History would show that eons ago, CHINA was our PAL!

With the resounding victory of DUTERTE’s ALLIES,

‘Tis clear  that the country has cast the DICE…

A STRONG MAN RULE by our PREXY,

Has now truly been allowed by DESTINY!

Not even MARCOS became so STRONGEST,

DU30 now will have a SUPERMAJORITY CONGRESS;

With this year’s 4 new appointees to the SC,

DUTERTE’s grand plans will push through so EASILY!

In the recent election that has PASSED,

The will of the people has now been BROADCAST…

As always, talks of RIGGING will surely EMERGE;

Those are from people who might habe been so SUBMERGED!

CHINA has taken the lead, reaping lots of WOWS…

We ought now to wean ourselves from AMERICA,

And that I feel is our visionary President’s AGENDA!