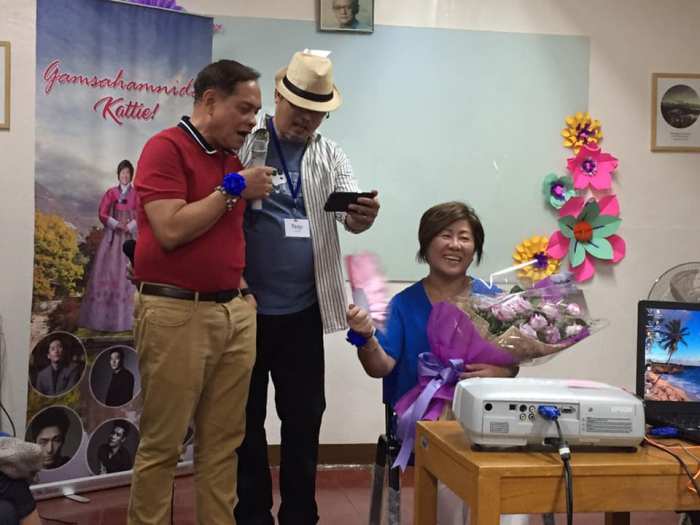 [Here is a photo taken during the DESPEDIDA Party (held at the ASPAC Office along Seminary Road in ATENEO) for outgoing ASPAC President Katherine Ngsuy Sy aka KATTIE while I and Nap Quejada serenaded her with a Chinese song entitled YUE LIANG DAI BAO WO DE XIN roughly translated in ENGLISH as THE MOON REPRESENTS MY HEART. It was tipped to us by Kattie’s sister, Atty. Carol S. Lansang, that that song is Kattie’s favorite. Below is the FUN RHYME POEM, I similarly recited after the song rendition.]

PURPLE is your favorite COLOR…

You’re a mix of ROYALTY & POWER!

Being born on May 21, you truly are a Taurus-Gemini CUSPER**…

Being such a CUSPER, you’re strong and mentally AGILE,

Traits that enable you to adapt to situations with a sweet SMILE!

You’re GEMINI with NOVELTY as BRAND,

You’re purposely CREATIVE and you exhibit much ELAN….

As past ASPAC Prexy, you want to do a LOT…

Let’s reserve some for the next Prexy who may be put on the SPOT!

You’re a TRUE-BLUE ATENISTA, and an ABLE ECONOMISTA…

Tis’ good you never did brag about being ATENEAN,

Like the one who is ATTORNEY RAUL’s boisterous FAN —

Your batch mate and your jolly mauve** *MISTAH****!

You are even a DYED-IN-THE WOOL DAVAOEÑA!

It would seem you’re leader too of the raging DUTERTE-MANIA,

In ASPAC, you’ve always  sounded the clarion call with a GONG!

‘Twas told that you’re crazy with those Korean TELENOVELA….

I’m sure you’re smitten too with  Bae YOUNG-joon, the star of WINTER SONATA!

Please be a fan too of the BOCELLI, BOWALLY ***** show, who sports the same name (i.e. YOUNG) and has now risen to FAME!

And as outgoing Prexy, my dearest magnanimous KATTIE…

You’ve indeed done a lot, as though ‘twas your cup of TEA!

You’re a hard and indefatigable worker, pausing indeed only to PEE!!!!

(2)**- CUSPER is a person who is born at the tip or cusp of two (2) astrological generations.