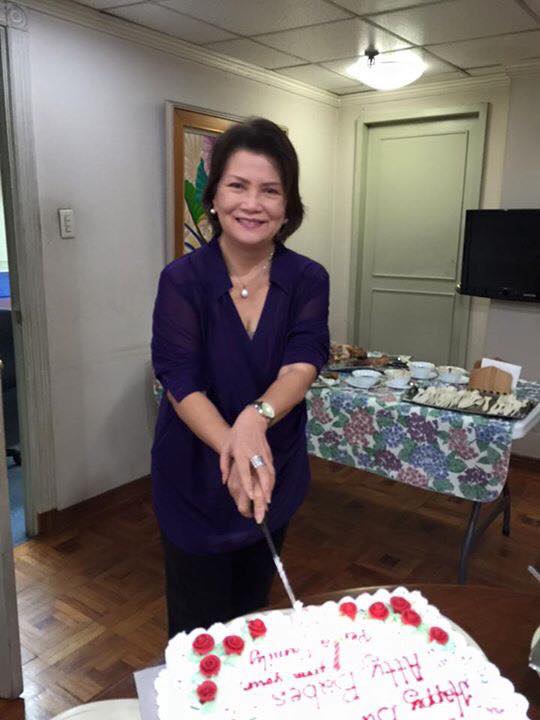 [My UP Law batchmate, ATTY. MARIA LORETO U. NAVARRO (endearingly called by us as BABES)  is shown here slicing her birthday cake in her last year’s celebration of her NATAL DAY at her Makati Office. HAPPY BIRTHDAY BABES!!!!]

Your HOROSCOPE1 describes you as IDEALISTIC,

You’re even described as GENEROUS and OPTIMISTIC;

‘Tis reported too that you’ve a mind which is ANALYTIC…

You are CREATIVE, it’s said but a bit SECRETIVE!

You seem to me so CALM and so IMPERTURBABLE;

But with talks about TOURING, the subject looms as your CYNOSURE…

As a hard worker, your reward is to TRAVEL with much LEISURE!

During our UP Law days, you were an APPLE,

But as his courtship style seemed not too PALPABLE…

He strayed as though a steed unwanting to leave the STABLE!

BABES is our CLASS’2 remembrancer,

Virtually has memorized all our birthdates like a geomancer;

Even knows the dates of the passing via the GRIM REAPER,

Of our batch mates who have opted to unite early with Our MAKER!

In our reunions, BABES is almost always co-organizer..

As though a matriarch who wants to be a KAISER3…

Would be contacting all those in the ENUMERATION4…

She wants every one to be part of the CELEBRATION!

She is indeed so MOTHERLY in her concern,

MOTHERLY in trait as I and others could discern;

But among those of our female batch MATES,

She looks as though “BELO-FIED”5, not like those with balding PATES5a!

And as a LITIGATOR she’s valiantly loyal to her CLIENT,

Couldn’t be swayed by the shenanigans of a dishonest SUPPLIANT6;

And the knavery of a rogue lawyer, she snipped;

The rascal eventually got his KARMA as  he got virtually GYPPED!

[Legend: 1 – HOROSCOPE – the positive traits of those born on December 10 can be accessed by encoding at GOOGLE the birth date. Those positive traits could be accessed particularly at TheHoroscope.co via the weblink or URL at https://www.sunsigns.org/birthday-10-december-zodiac-sign-sagittarius-astrology-steadfast/

2 – BABES belongs to the UP Law Class of 1979 of the EVENING SECTION actually. I originally belonged to this class, except that as I went on a leave-of-absence, I eventually became part of UP Law-Class of 1980.

3 – KAISER is used in this BLOG to mean a LEADER or a HEAD; and principally to achieve a rhyme.

4 – ENUMERATION would refer to the LIST actually of our classmates not only in the EVENING SECTION but also in the DAY SECTION.

5 – “BELO-FIED” is a reference to the country’s leading Filipina dermatologist and beauty consultant. If ever, a personality most particularly ladies would look so young despite of senior age and so cosmetically  pleasing, the label of having been “BELO-FIED” would usually set in.

6 – SUPPLIANT is used here, to mean as a party to a litigation, most particularly a PETITIONER.]