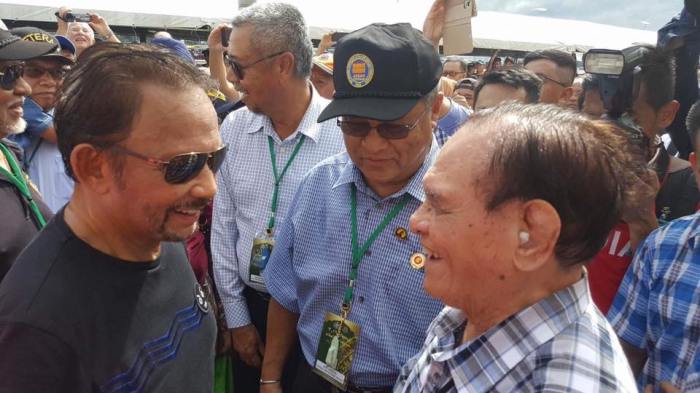 [Daddy Max P. Young (at right) is shown here casually chatting with  SULTAN HASSANAL BOLKIAH, Brunei’s YANG DI-PERTUAN and incumbent Prime Minister (at left) during one of the proceedings in the CONVENTION OF WAR VETERANS OF ASEAN COUNTRIES hosted and held in BRUNEI from November 23-27, 2017.]

Pagkatapos ng enkwentro nila’y there was LAUGHTER in seeming RAMPAGE!

When the SULTAN asked our Daddy…

As to his SECRET in aging LONG and    DANDY!

Daddy asked the SULTAN: “Can I just whisper it into your ears?”…

SULTAN did agree as though Dad was among his PEERS!

And there was seeming RAMPAGE10, after Daddy Max WHISPERED..

Daddy Max violated PROTOCOL11…Oh GOD, he could be INCARCERATED12!
For Daddy MAX felt so elated and even so EXCITED,

But when the SULTAN heard Daddy Max’s MURMUR,

The SULTAN LAUGHED so LOUD and did it with much FERVOR…

And all the royal guards laughed in sequential UNISON,

But they didn’t  know in fact, what the SULTAN heard in his TYMPANUM14!

[Legend: 1 – Daddy refers to Daddy Max aka Maximo Purisima Young, who was sent by the Philippine government to represent the country in the convention of war veterans in Brunei from November 23-27, 2017.

2 – The CONVENTION among war veterans in the ASEAN region was hosted by the VECONAC of Brunei aka VETERANS CONVENTION OF ASEAN COUNTRIES from November 23-27, 2017.

3 – YANG DI-PERTUAN literally means “HE WHO WAS MADE LORD”. It is the appellation accorded to the Sultan and incumbent Prime Minister of BRUNEI.

3a –OBRA mean work and in this particular usage, it means court hearings and paper work/court pleadings.

4 – POTENG is the nickname of my youngest brother, WARREN TOBIAS YOUNG.

4a- UMUBRA is a Tagalog term which means “to be able” or “to have the time for”.

5 – Though POTENG aka WARREN was scheduled to be INDUCTED as new President of the country’s ALPHA PHI OMEGA Fraternity-Alpha Chapter (“APO-Alpha Chapter”); Warren obliged himself to chaperone Daddy Max as he was almost willing to be INDUCTED in-absentia and has designated a close brod of his to just read his acceptance speech. It was good that the APO hierarchy eventually decided to reset/reschedule the INDUCTION rites to December 16, 2017.

6 –  Doc is Daddy Max’s physician at the UERM, where my brother Wilson is Vice-Chairman; Doctor Stephen Medel.

7 – VECONAC is the acronym for VETERANS CONVENTION OF ASEAN COUNTRIES.

8 – The CONVENTION was conducted in a formal proceedings in a venue in Bandar Seri Begawan. It was not certain that Sultan BOLKIAH would arrive but that as the incumbent President of the VECONAC, a citizen of BRUNEI and who was in the past part of Sultan BOLKIAH’s Royal Army, is close to the Sultan, Sultan BOLKIAH arrived indeed. And the Sultan entered the hall nearest to where Daddy Max was seated. And the President of the VECONAC sort of bragged that there is a CONVENTION delegate from the Philippines who is 95 years old. Thus, Daddy Max and Sultan eventually rubbed elbows with each other.

11 – It is PROTOCOL that no one must lay a hand or touch the Sultan; but Daddy Max even did a SHOULDER TAP upon the Sultan. And when the Sultan burst out in LOUD laughter; all the ROYAL guards laughed in UNISON with much PRECISION (meaning when the Sultan stopped laughing; they all ceased laughing as well).

12 – As it was a time-honored principle that the Sultan cannot be touched by any other person; indeed, if an overly-enthusiastic ROYAL GUARD were around, Daddy Max could have been arrested and thereafter detained.

13 – The SHOULDER TAP is a common gesture between acquaintances and friends of tapping the shoulder of another or in an extreme manner of showing friendship via a side to side hug with the hands and the arms sliding over the shoulder of the other person.