[Shown at left is BRP Rajah Humabon while docked at the Philippine Navy Headquarters along Roxas Boulevard, Malate, Manila. The TWO (2) photos at right show the ASPAC Parents with their respective kin as photographed with the ship as backdrop (top photo) and at the facade of the PHILIPPINE NAVY HEADQUARTERS (bottom photo).]

Everyone was so excited as all was raring to shout HURRAY!

Para bagang ready to do some SPORTS11! 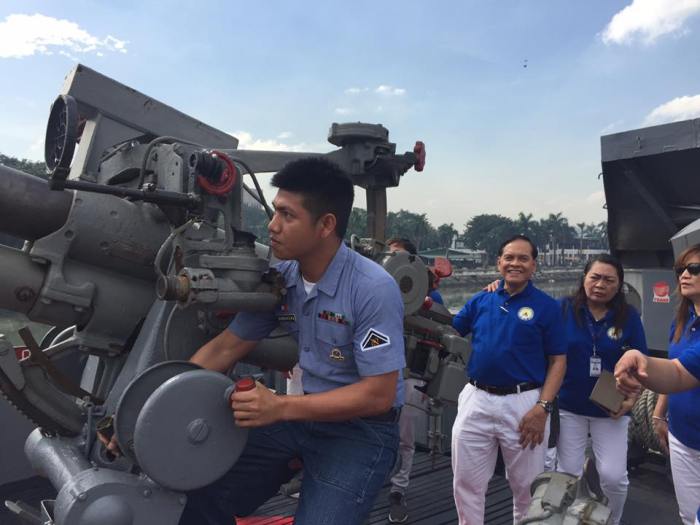 But it truly was EDUCATIONAL & so FANTASTIC,

Thence, the ship was used as a mere PATROL FRIGATE!

Dahil gusto ay PICTURE-TAKING in all of the EVENTS;

FRANTIC na ang lahat until they reached some kind of “FORTY-FOUR”22!

At the WARDROOM where the air was COOL23,

We somewhat felt that we entered a MESS HALL…

There was a table there and plenty of heavy CHAIR,

And the guided TOUR was actually  done in a PAIR24! 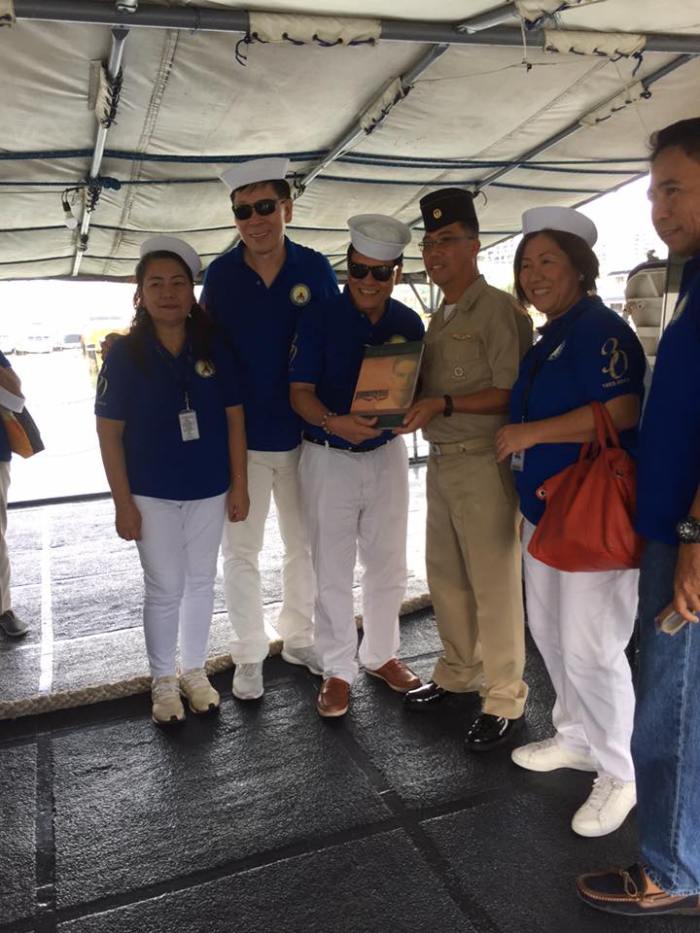 It thereafter gave me the chance to donate a BOOK27 for the NAVY,

So, I gave the BIO-BOOK entitled FOREVER YOUNG to its LIBRARY28,

Daddy Max was a former soldier too29,

It gives me full pride to share the BOOK for the NAVY’s CREW30!

[Legend: 1 – HUMABON is the BRP Rajah Humabon (PS-11) and was formerly the US Navy destroyer escort USS Atherton. USS Atherton saw action during World War 2, dropping depth charges while hunting for the German submarine U-853, which she is credited of destroying. This makes the HUMABON ship among the only active warship in the world credited of sinking an enemy submarine. Rajah Humabon, later baptized as Don Carlos, was the Rajah of Cebu at the time of Portuguese explorer Ferdinand Magellan’s arrival in the Philippines in 1521.

2 – HUMAPON means to roost or to settle. Mostly used for BIRDS and FOWL; but used in this BLOG to mean “to dock”. BRP Rajah Humabon usually is docked in Sangley Point in Cavite. It was good that in reply to the ASPAC’s request for a guided tour of the ship, it was brought from Sangley Point to dock at the Philippine Navy Headquarters along Pres. Roxas Boulevard in Malate, Manila.

3 – EUVIN is Ms. EUVIN P. DELA CRUZ who is an incumbent Board Member of the ATENEO SCHOOLS PARENTS COUNCIL (“ASPAC”) and the better half of Philippine Navy Captain REY DELA CRUZ, who was formerly Liaison Officer of the Philippine government to the United States Pacific Command.

4 – REY is EUVIN’s suave-looking husband, Philippine Navy Captain REY DELA CRUZ. In one of the meetings of the ASPAC, as the Christmas Party of the ASPAC which is set on December 9 adopted “IN THE NAVY” as theme, EUVIN casually broached the idea of having a guided tour unto the Philippines’ former flagship, the BRP Rajah Humabon.

5 – There appears to be a resurgence on the fondness of most of the ASPAC parents most particularly Ms. Cynthia Ong unto the songs of the VILLAGE PEOPLE, particularly the song “IN THE NAVY”. And the title of the song was adopted as THEME of the ASPAC Christmas Party on December 9, 2017 at the Rooftop of the ATENEO Leong Hall.

6 –  EDNA NATIVIDAD is incumbent Year Level Representative of the ASPAC.

7 – ROBERT TAN is the incumbent Vice-President of the ASPAC.

8 – RACHELLE TAN is ROBERT TAN’s better half and is incumbent Board Member of ASPAC.

9 – “ISPUTING” is Tagalog slang which connotes being well dressed, neatly-dressed or fashionably dressed.

11 – SPORTS – I am actually egging my friend and ASPAC colleague RAUL BRIOSO to join as participant in the coming SECOND ASPAC BADMINTON TOURNAMENT scheduled to be held on November 30, 2017 at the Badminton Hall located at No. 6 20th Avenue, Cubao, Quezon City from 7 AM to 12 Noon.

13 – PROTOCOL  means some kind of procedure; as before the GUIDED TOUR, we were all apprised about the rules and regulations which are in effect and are being enforced within the Philippine Navy premises.

14 – RAUL BRIOSO is the same RAUL BRIOSO mentioned in No. 10, and is, as earlier said, an incumbent ASPAC Year Level Representative.

16 – Ms. CYNTHIA ONG is incumbent ASPAC Board Member. CYNTHIA was more interested in the operations of the Philippine Navy most particularly with its sovereignty surveillance chores. And the query made by CYNTHIA eventually pertained to pirates who conduct their illegal trade in the high seas as well as other criminal activities in the high seas such as illegal entry through the high seas of drugs.

17 – HOODLUM refers to criminal elements doing their trade in the high seas.

18 – US ATHERTHON – USS Atherton (DE-169), is a Cannon-class destroyer escort, and it was the only ship of the United States Navy to be named for Lt. John McDougal Atherton, who died when the USS Meredith sank near Guadalcanal during World War II. Atherton (DE-169) was laid down on 14 January 1943 at Newark, New Jersey, by the Federal Drydock & Shipbuilding Co.; launched on 27 May 1943; sponsored by Mrs. Cornelia A. Atherton, the mother of Lt.  Atherton; completed at the Norfolk Navy Yard; and commissioned there on 29 August 1943, Lt. Comdr. Paul L. Mansell, Jr., USNR, in command. The ship was acquired by the Philippine government on December 23, 1978; thence it was commissioned on February 27, 1980. BRP Rajah Humabon, for a time served as the Philippine government’s flagship, but is now being used merely as a training ship by the Philippine Navy.

19 – RUBRIC refers to the name or the signage given the ship.

20 – The SHIP formerly known as USS ATHERTHON and now as BRP Rajah Humabon was acquired by the Philippine government on December 23, 1978.

21 – FANTAIL is that part of the ship which is a  rounded overhang of its STERN. The STERN, on the other hand, is the back or aft-most part of a ship or boat, technically defined as the area built up over the sternpost, extending upwards from the counter rail to the taffrail. The STERN lies opposite of the BOW,  the foremost part of a ship.

23 – COOL – It would seem that the only places inside the ship BRP Rajah Humabon, where it is air-conditioned are the BRIDGE, the WARDROOM and I guess, the MESS HALL. We were not actually led to the MESS HALL as perhaps, we might then feel as though they are inviting us to take our lunch on board BRP Rajah Humabon (joke only Sirs!).

24 – PAIR – The group of ASPAC parents plus their kith and kin were divided into TWO; actually a PAIR. After the video presentation was had at the covered portion of the FANTAIL, the first group (with Prexy Kattie Sy and Veep Robert Tan as members) started out with a guided tour at the SHIP’s Wardroom while the second group (with me and ASPAC Treasurer Juliet Remorque as members) started at the SHIP’s BOW where the 3inch/50 cannon was mounted.

25 – The BOOK (entitled FOREVER YOUNG) is the biographical book which I wrote about my Daddy Max, who is himself a soldier, a war hero and once a sailor in a commercial ship in the 1930s.

27 – AKLAT which is Tagalog term for BOOK which I opted to bring to donate to the PHILIPPINE NAVY MUSEUM and LIBRARY.

28 – BOOK The PHILIPPINE NAVY HEADQUARTERS stationed along Roxas Boulevard in Malate, Manila has a MUSEUM which doubles as its LIBRARY.

29 – Daddy Max as previously said was a soldier. He was conscripted into the military when the World War 2 broke out, as a member of the United States Army Forces in the Far East aka USAFFE. Daddy Max was awarded the Silver Star Medal by the US government in recognition of his daring war feat during the SECOND WORLD WAR. Daddy Max was also awarded a GOLD CROSS Medal by the Philippine Army in recognition of his heroic role in the Battle of Miudong during the 1950 KOREAN WAR.

30  – In the dedication I wrote on the blank FRONTISPIECE page of the BOOK, it is there written: FOR: THE PHILIPPINE NAVY HEADQUARTERS’ LIBRARY/MUSEUM/ TO THOSE WHO MAY HAVE THE CHANCE TO READ THIS BOOK/ THINK YOUNG! LIVE YOUNG! STAY FOREVER YOUNG! ]