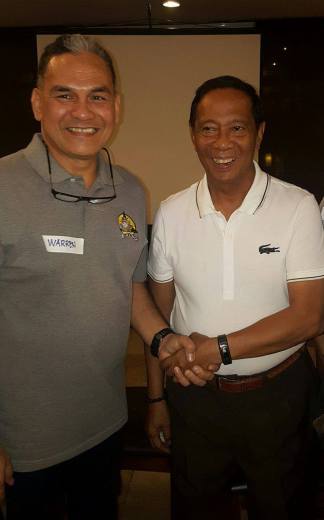 [The melange of photos spread through this BLOG shows WARREN in his jovial mood. Photo at left above shows WARREN with former VP Jejomar Binay; and at right above, with incumbent DOLE Secretary Silvestre Bello III. Whilst the other two (2) photos shown below at the bottom portion of this BLOG show WARREN bonding with whom he so loves most to BOND, with FAMILY. *-BULANGKEG 2 is WARREN’s sort of NOM DE GUERRE, a PSEUDONYM accorded to him — as has been customary with the ALPHA PHI OMEGA Fraternity; when WARREN entered and became neophyte of the ALPHA PHI OMEGA Fraternity, at its ALPHA CHAPTER, the FAR EASTERN UNIVERSITY.]

The venerable APO1 Frat was FOUNDED in March in R.P.2,

R.P. is acronym for our Philippine COUNTRY,

‘Tis that year the ALPHA Chapter 3a  elected a humble LUMINARY4!

He’ll re-assume a leadership post, and we’re all ELATED…

At the F.E.U.6, a prestigious UNIVERSITY…

They truly admired his stint as captain of the BOAT;

The memory of LEVY7 would stay instilled in their MIND;

SERVICE will always be part of their DAILY GRIND!

And the founding papers got documented at NICANOR REYES HALL8,

‘Twas the  first meet which ushered the APO PROTOCOL;

But for the cause of FAMILY, WARREN had to miss the CALL9…

He’d have to serve our 95 year old Dad for any mishap to FORESTALL10!

With the teeming chapters, ‘twas something that INSPIRED…

And as loyal  member of this SERVICE FRAT,

WARREN has turned CHIVALROUS from being once a CHILD-BRAT11!

In a call for SERVICE, TENG12 is really  APPROACHABLE…

He seems to be truly always AVAILABLE,

He responds too QUICKLY  as though ordered by a KING!

TENG is so profusely COOPERATIVE,

He inspires CONFIDENCE in all of his FRIENDHIP…

He’s endowed with INTELLIGENCE and a TENACIOUS SPIRIT! 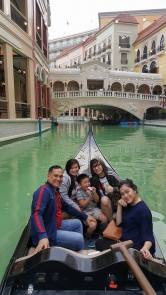 [WARREN is shown in these photos bonding with whom he loves most to BOND, with FAMILY!]

CONGRATULATIONS ON YOUR ASSUMPTION AS PRESIDENT OF THE APO-ACAI FOR 2017-2019!

[Legend: 1 – APO is acronym for the ALPHA PHI OMEGA Fraternity.

2- R.P. is acronym for Republic of the Philippines.

3a- The ALPHA Chapter of the ALPHA PHI OMEGA Fraternity was organized at the FAR EASTERN UNIVERSITY located in Morayta Avenue, City of Manila.

4 – LUMINARY is used in this BLOG to mean an unassuming servant leader.

5 – WARREN is my youngest brother, WARREN TOBIAS YOUNG, in a brood of EIGHT (8) children brought to this world by our parents, Maximo P. Young and the late Norma Tobias.

5a- WARREN during his collegiate stint at the F.E.U was elected as GRAND CHANCELLOR of the APO-Alpha Chapter, which is the APO Fraternity based at the F.E.U.

8 – NICANOR REYES HALL is a building at the F.E.U. campus where the first meeting of the first APO Chapter in the Philippines was held.

9- WARREN has to skip attendance at his INDUCTION as the new President of the APO-Alpha Chapter Alumni Association as he was designated CHAPERONE to our 95-year old Daddy Max (i.e. Maximo P. Young) who has been handpicked by Secretary of the National Defense of the Philippines, DELFIN LORENZANA, to represent the Philippines in the REGIONAL CONVENTION OF WAR VETERANS in BRUNEI from November 23-27, 2017.

10 – As Daddy Max, by reason of his age, needed to get a medical clearance prior to embarking on the BRUNEI trip; he was given the GO signal and a clean bill of health by his physician, subject however to the condition that Daddy Max has to be accompanied by a CHAPERONE in the person of our youngest brother WARREN.

11- WARREN was never in fact a BRAT; and that the use of the word “BRAT” is to achieve some kind of rhyme. CHILDHOOD however connotes some kind of “BRAT-NESS” or of being like a BRAT (especially among the youngest of the brood like WARREN).

12- TENG is WARREN’s more endearing NICKNAME, actually a contraction of his other more popular nickname, POTENG.]