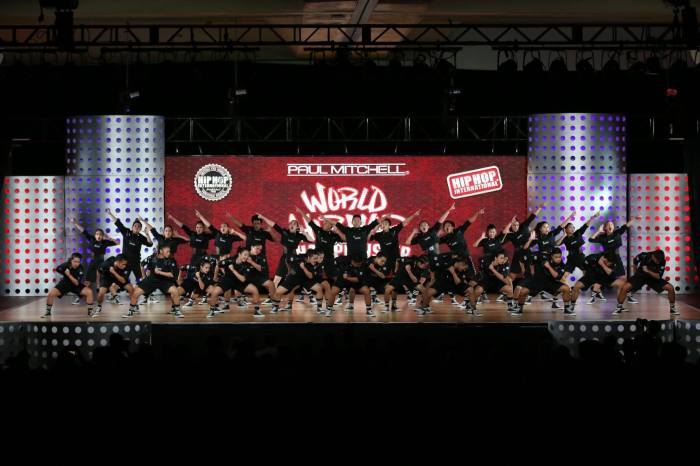 [The LEGIT STATUS HIPHOP DANCE Team is here shown, as they presented themselves on the WORLD STAGE at the 2017 WORLD HIPHOP INTERNATIONAL CONTEST at the ARIZONA GRAND RESORT & SPA in Phoenix, Arizona. During the ELIMINATION ROUND where more than 50 participating teams saw action, 25 teams moved up to the SEMI-FINAL ROUND. LEGIT STATUS ranked 2nd while ALLIANCE ranked 6th! LET’S ALL CONTINUE PRAYING FOR THE PHILIPPINE TEAMS TO GRAB THE GOLD!!!!]

[Legend: 1 – LEGIT STATUS HIPHOP Team ranked SECOND in the ELIMINATIONS/PRELIMINARIES at the 2017 WHHI in Phoenix, Arizona. LEGIT STATUS scored 7.93 while the leader of the pack, DM NATION from CANADA scored 8.02. Though the ELIMS ranking is not much of a significant factor that would be reckoned in the FINALS, it augurs well still, for as long as they maintain it at that, they can be shoo-in for the FINALS as the FINALS would be a battle among the TOP (7) of all the participating teams.

2 – The ALLIANCE HIPHOP Team can make it too into the FINALS (as long as they maintain their momentum) as ALLIANCE ranked 6th in the PRELIMS/ELIMINATIONS. ALLIANCE scored 7.40.

3 – Following the ELIMINATIONS, the SEMI-FINALS is next where about 25 teams will compete against each other.

6 – A great number of the teams competing at the WHHI have gained some kind of reputation as perennial CHAMPS such as the ROYAL FAMILY of NEW ZEALAND and these teams would want their reputation maintained.

7 –  INNOVATION would take the form of new and more intrepid stunts or new and added steps and movements.

8 – REVISION would mean actual change in the dance movements to make for a more fascinating dance choreography.

9 – As earlier said in No. 5, the hiphop teams’ choreography is TOP SECRET until the date of the competition and performed on the world stage.

10 – AUDIO would be the song or music that accompanies the dance number.

11 – VIDEO would be the DANCE CHOREOGRAPHY.

12 –  Let’s all pray that the teams will not commit any major mis-step or mistake, most especially with respect to the STUNTS.

13 – My daughters’ almost daily practice schedule is 7 PM to 1 AM and they usually are at the venue hall by 6 PM and would continue to do some after-the-practice-meetings until 2 AM at times.

15 – The MEDALYANG GINTO, is the GOLD MEDAL which is up for grabs at every year’s WHHI…plus the BRAGGING RIGHTS too…he,he,he…Incidentally, our Philippine teams (i.e. LEGIT STATUS and ALLIANCE) will enter in the MEGACREW, ADULT and VARSITY divisions; and that would be THREE (3) GOLD MEDALS…]