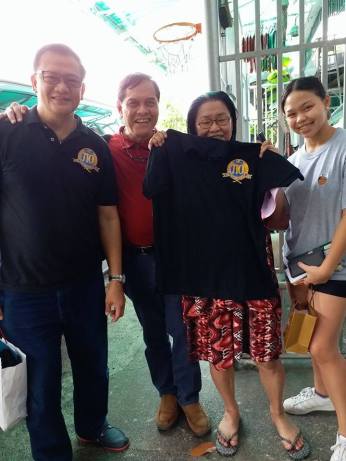 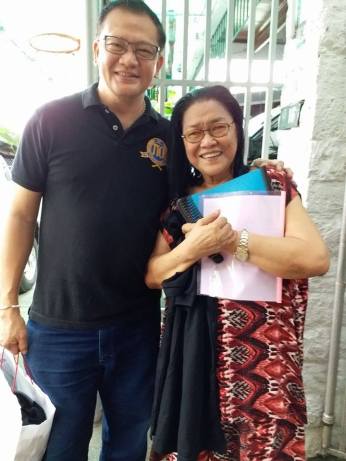 [At LEFT group photo, Sis Lolit Solis (perhaps excited to don the PI O shirt and seemingly unmindful of the photo-taking) is seen trying to check whether the PI O shirt (size XL) which Brod Bert Somera gave to her as a gift (despite her XXL size) would fit her. At RIGHT photo is the tandem of Brod Bert Somera and Sis Lolit Solis. Sis Lolit was a bit adamant to be pictured UN-MADE-UP. Pero, sabi ni Brod Bert, mas mukhang ANGELIC daw si Sis Lolit kapag walang  MAKE-UP. Also shown at the LEFT photo is my daughter ALEE at extreme right.]

[Legend: 1 – The appointment with Sis Lolit Solis was set at around 9 AM for which reason, I told Brod Bert Somera for us to meet at 7:30 AM at my Law Office, so that we could reach the North Fairview home of Sis Lolit even before 9 AM.

3 – In almost my countless times of meeting with Sis Lolit Solis, I take it as an opportunity to interview and probe her for those juicy news about show business. But as we came to reach Sis Lolit’s home too late already, I surely missed a chance to have a more extensive interview and those eventual revelations/disclosures.

4 – Brod JONAH SALVOSA was supposed to come with us. Brod JONAH wanted to seek Sis Lolit’s help in persuading celebrity mothers like Marian Rivera, etc. to act as model in Brod JONAH’sa project of 100 paintings depicting nursing mothers with their respective child entitled 100 BREASTFEEDING MOMS, with the view of setting a world record of 100 oil paintings  advocating BREASTFEEDING.

5- Well, perhaps because of his SENIOR AGE, Brod JONAH thought that our meeting time at my Law Office was 7:30 PM and not 7:30 AM.

6 – LIYAG is actually a Tagalog term which means BELOVED. And BUNSO means YOUNGEST….thus, it refers to my youngest daughter who is Sis Lolit’s godchild, ALEE.

7 – BINYAG is the BAPTISM RITES.

9 – RECADO is actually additional ingredient or accessory. Well, Sis LOLIT gave ALEE a gift consisting of BELO beauty products and as RECADO or as ADDITIONAL, a big packet of KITKAT CHOCOLATE-WASABI FLAVOR.

11– NAGTATAHULAN means dogs barking in UNISON. In fact, Sis Lolit keeps a kennel of 38 POMERANIAN toy dogs plus 4 more large-sized dogs which serve as guards at the front gate of her house.

13 – The reported plan is that Vicky Belo and Hayden Kho will have a second wedding in Paris, France. The couple had their first wedding at the Makati City Hall, officiated by the incumbent Makati City Mayor, Abigail “Abby” Binay.

14 – French President Emmanuel Macron is supposed to stand as one of the  principal sponsors in the SECOND WEDDING ceremony between Vicky Belo and Hayden Kho to be held in Paris. Reportedly, the wife of Pres. Macron is Vicky Belo’s close friend.

15 – BRUHA is a slang in gay lingo which means WOMAN.

16 – BRODA is a distortion of the word BROD and/or BROTHER and is pronounced BRUH-DA for RHYMING purpose.

18- Brod BUTCH CAPARAS is a senior alumni member of the PI OMICRON HOLY ANGELS’ UNIVERSITY CHAPTER of Angeles City, Pampanga. Brod Butch Caparas was so really persistent in ascertaining whether LOLIT SOLIS is a DELTA PI OMICRON Sis. And I thank Brod Butch Caparas for his “PANGUNGULIT”, for if not for that, I would have not been challenged to bring Brod BERT SOMERA to Sis LOLIT SOLIS to prove my point.Thank you so much Brod BUTCH CAPARAS!

20- PEN PEN DI SARAPEN is a favorite rhyming song which was popular during the school days of both Sis Lolit and Brod Abet.]