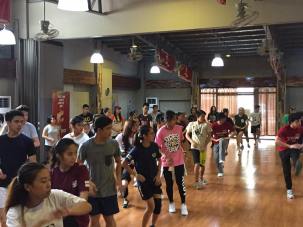 [Here are photos of dancers who were snapped dancing and strutting at the GROOVE CENTRAL DANCE STUDIO particularly the LEFT PHOTO. At RIGHT is a photo showing the briefing being done to applicants for the LEGIT STATUS’ auditions to admit new members into its fold. For the real beginners, the chance to visit and have a look-see of the GROOVE CENTRAL DANCE STUDIO located at No. 104 13th Avenue, Barangay Socorro, Cubao, Quezon City, Metro-Manila would be most helpful and even enticing. DEMO CLASSES will be held tomorrow, April 3, 2017 (MONDAY) until April 7, 2017 (Friday) starting at 3:00 PM. WITHOUT DOUBT…HIPHOP HAS BECOME THE ACTIVITY-CRAZE AMONG KIDS AND YUPPIES TODAY AS IT GIVES THEM ADDED ECLAT AND ZING!]

For those  who would just want to see & observe,

Not much convinced yet to dance & swerve;

It would be a sight to behold & see!

Indeed, those who’re intent to enroll,

Will have the chance to really stay cool;

Especially those who will be like “hiphop style neophytes”2,

They’ll be primed & prepared for those seeming “fights”3…

Demo classes will be run by 154 of the coaches,

It will be fun-filled day devoid of  any hitches;

You may opt to join the dancing & some strutting,

Or may just choose to do some testing!

Graham’s5  credo is that DANCING is true EXPRESSING,

So everyone who’s intent must not be MESSING;

When you’ve had the chance to do some DEMO6,

For those who just want some kind of exercising,

That would all be good for one’s LOCOMOTION!

The roster of DANCE COACHES who’ll do the DEMO…

I’ll list them next time for guidance as some kind of MEMO;

Topnotch Coach VIMI9 would not be there,

But Coach SHANE10 will be IN, she’s one whom VIMI holds DEAR!

Will show off his ware as though DANCE is a SCIENCE;

Coach CHESKA12 will be a no show for the KIDS,

She’s too caring as she doesn’t want KIDS, this early to sweat in BEADS!

My dear ALEE13 too, she’s still schooling though …can’t SAY,

But Coach TINA14 as HEAD COACH  in BALLET may be there to PLAY15;

She’ll be teaching those babies how to do a PIROUETTE16,

AND PLEASE DON’T DO A WHIFFLER-WHAFFLER SPREE…REMEMBER THIS DEMO CLASS IS FREE!!!!

[Here’s another photo, actually a photo showing FULL-HOUSE dancing, of a HIPHOP dance class at the GROOVE CENTRAL DANCE STUDIO….people from all walks of life; young and old alike…]

CHEERS and GOD BLESS unto the coming DEMO STUDENTS/CLASSES at the GROOVE CENTRAL DANCE STUDIO!!!!

2 – NEOPHYTE is used here to mean though with skills in HIPHOP already could still be deemed a BEGINNER in the diverse HIPHOP styles of DANCE. For the real beginners, the chance to visit and have a look-see at the studio itself would be most helpful and even enticing.

3 – The dance classes with be “seeming fights” as those students will really have to show off their dancing skills as though they are in a continuing series of contests/competitions … day in; day out.

4 – FIFTEEN (15) of the 35 teaching COACHES have initially conveyed their availability to do DEMO classes. The schedule is still being finalized and another BLOG will be published upon finalization of the list and schedule.

7 – NOVATO actually means a BEGINNER or a ROOKIE. But as HIPHOP consists of may types and styles, one could be skilled in a particular STYLE but could still ne a NOVATO in another. Learning new styles in HIPHOP would indeed be CONTINUING. Once more, for the real beginners, the chance to visit and have a look-see at the studio itself would be most helpful and even enticing.

9 – VIMI is Coach VIMI RIVERA and is the Team Director of the LEGIT STATUS DANCE TEAM which Varsity Dance Team won 1st Runner-Up in the 2015 WHHI held in San Diego, CA, USA. The LEGIT STATUS Dance Team has been joining and competing at the WHHI for a couple of years now since 2009.

10 – SHANE is SHAYNA whose full name is Winshayna E. Young, my eldest daughter, who teaches the PROJECT GROOVE HIPHOP class.

11 – JJ G. SAN JUAN is the Head Coach and Team Director of the ALLIANCE Team. The ALLIANCE Dance Team like the LEGIT STATUS Dance Team is composed of dancers from different schools in the metropolis and it has been joining and competing at the WHHI for some time now. The ALLIANCE Team bagged the BRONZE medal during the 2016 WHHI held in Las Vegas, USA.

12 – CHESKA is Ma. Wincheska E. Young, my middle daughter, who will teaching KIDS HIPHOP. There’s no compelling reason to hold a DEMO as the DEMO is more fitting those in the know on HIPHOP already and are just intent at choosing which style of hiphop dance to master.

13 – ALEE is Ma. Winnalee E. Young, my youngest daughter, who is Assistant Coach in BABY BALLET. ALEE is still schooling at the ATENEO taking up a course in Management.

14 – Coach TINA is CRISTINA VALDERRAMA who is the Head Coach in BABY BALLET and is professionally focused on this vocation.

15 – PLAY – the session with the babies would be a veritable PLAY as though the babies are just playing as they make it a point for the babies to enjoy the dance routine.

16 – PIROUETTE is a ballet move or action which is performed by an act of spinning on one foot, typically with the raised foot touching the knee of the supporting leg.

17 – WET is used here in the jocular context to the effect that INFANTS are more often than not WETTING in their diapers.]