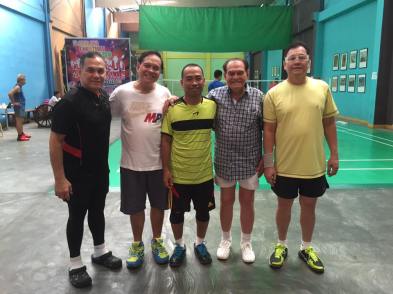 [Left photo is that of JOHARI ISMAIL who took a selfie of himself inside a tourist bus during one of the NDCP’s class excursion to various destinations in the country. Left photo is the group photo taken before the badminton tourney held on March 12, 2017 (Sunday morning) at the Badminton Hall located at No. 6, 2oth Avenue, Cubao, Quezon City, Metro-Manila, Philippines.]

On Thursday, as I was presiding over the YOGA practice1,

I saw JOHARI from afar as though a badminton novice2;

He looked as though a provinciano3 from his naïve looks,

Could be an ILOCANO or perhaps in a town up the boondocks4!

But when I was introduced to him,

I was amazed to know and learn;

He is a top military officer of Malaysia5,

Still young,  he’ll  have a future of euphoria!

And when he played and smashed the cock,

JOHARI6 was really strong, as hard as rock;

I played a round of singles with him,

The score was not even tied, ‘twas uneven!

And when we had our weekly tourney,

He was fantastic and truly energetic,

And he loves our Filipino food,

He craves for cuchinta8, he said– it’s good!

And even eats our bread, the pan de sal9,

Lugs it in his  bag and offers it to a pal.

He’s a devout Muslim and prays at the mosque at Greenhills10,

And has travelled a lot– even at Bacolod up to the Victorias Mills11;

He’ll stay for a year in our beloved country,

Schooling at the NDCP12 honing his career in the army!

He’ll now be a regular player at the Hall13,

We’ll have a skilled player to add to our roll;

Thus, we’ll always have a quorum of FOUR,

For our doubles game, we’ll have a quick SCORE!

WELCOME JOHARI TO OUR CLUB AND THE BADMINTON HALL!!!!

[Legend: 1 – Every Thursdays and Saturdays, I preside over a YOGA practice which I started about 7 years ago. It was a Thursday, on March 9, 2017 at the Badminton Hall located at No. 6 2oth Avenue,Cubao, Quezon City, Metro-Manila, Philippines when I first had a glimpse of him. The YOGA practice was being done at the eastern end of the Badminton Hall, actually at the inner court, as that inner court is reserved for YOGA practice  from 6:30 PM till 8:00 PM on Thursdays while badminton playmates are still few. JOHARI arrived while we were in the middle of the YOGA practice as he sat thereafter in one of the monobloc chairs located near the inner gate leading to the Hall.

3 – Provinciano is a term which means coming from the province, a rural folk.

4 – Boondocks originated from an original Filipino word, BUNDOK, and which got assimilated into the English language and which means the hills or a rural area near the hills.

5 – JOHARI ISMAIL is a Lieutenant-Colonel with the Malaysian Army and is in the Philippines for schooling at the NDCP which college is located within the Camp Aguinaldo grounds. JOHARI started with his NDCP course in September 2016 and will graduate in September 2017.

7-  JOHARI emerged as co-champ with Mandaluyong City Fiscal, Wally Francisco as his team-mate in the team-pairing tandem.

9-  Pan de sal is the usual  table fare bread in the Filipino household during breakfast.

10 – The Muslim mosque is located at the GREENHILLS shopping center at Greenhills, San Juan City, Metro-Manila.

11-  Victorias Mills is the VICTORIAS MILLING CORPORATION, a corporate entity which owns the sugar milling factory, which is located at Victorias City about 44 kilometers distant from Bacolod City in Negros Occidental. Earlier, and most coincidentally so, (even before I met JOHARI) my brother WILSON, who is himself a graduate and alumnus of the NDCP, and being the incumbent Chairman of the VICTORIAS MILLING CORPORATION; conveyed an invitation to the current NDCP class to visit the VICTORIAS MILLS, when the group had an excursion/field trip to Bacolod City in Negros Occidental. To this, JOHARI himself sighed: “‘TIS REALLY A SMALL WORLD!”