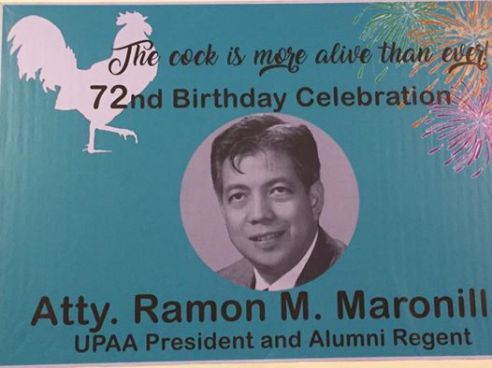 [At left photo is the tarpaulin used as backdrop at the stage put up at the UP Bahay ng Alumni during the March 11, 2017 72nd birthday celebration of my Kumpadreng MON MARONILLA which cockily proclaimed: “THE COCK IS MORE ALIVE THAN EVER!”. Top right photo is a group photo with WILLIENEP and Kumpadreng MON.  Bottom right photo is WILLIENEP, the master impersonator.]

We trekked on to it last Saturday, though traffic2 was  HIGH;

It was Kumpadreng MON’s3  birthday CELEBRATION,

It was  a night of FUN & JUBILATION!

The tarpaulin as backdrop to the stage was TITILLATING,

It talked about a COCK in white silhouette as though ROOSTING4;

As the caption on the tarp as written AVERRED,

It read: “The cock is alive more than EVER!”

I was a bit doubtful which COCK — MON was referring TO,

Though I know that MON is a cockfight AFICIONADO;

But as he neither have nor rent a COCK FARM,

He could be referring to a COCK of a friend in SAN JUAN5!

In a month when the Japs in Manila have finally FORTIFIED7;

For which reason the GIs bombed and the Japs then got GIRTHED8,

The shelling & bombing, like fireworks, seemed to herald MON’s BIRTH!

Indeed MON was born in the Year of the COCK,

Though the usual name is ROOSTER,  COCK is lingo for the CROCK9;

But COCK or ROOSTER or could be FOWL,

As he recited out a prayer with much FORMALITY;

Thereafter some singing wafted in the AIR,

As the feasting begun with so much FLAIR!

And the hall thereafter was FILLED,

With angelic voices of singers who really are SKILLED!

As to the feast– I loved the LECHON11 with its SAUCE,

As the skin was crispy and shiny with GLOSS…

But the exciting thing that HAPPENED,

Is that we got seated with MON’s comic FRIEND;

It was WILLIE NEP12, the grand comedian and  the best in IMPERSONATING,

With  hearty laughs, my belly turned out  OSCILLATING13!

[Legend: 1 – The University of the Philippines-Bahay ng Alumni is a commodious events place which is located along R. Magsaysay Street in U.P.’s Diliman campus. It was actually put up on June 19, 1992. It is also home to several business establishments such as 3 restaurants, travel agent, a bank, law firms, a review center, and an art gallery.

2 – Traffic was heavy along the Katipunan Avenue as reportedly, there was an affair too at the ATENEO.

3 – Mon is my kumpadre and friend, Atty. Ramon M. Maronilla, the incumbent President of the UP Alumni Association, Inc.

4 – Roosting means resting, the usual term for a rooster or a cock on perch while resting.

5 – One time, I was brought by my Kumpadreng Mon to a place in San Juan City in Metro-Manila, know as the Barasoain area where the former stately residence of the family of my Kumpadreng Mon was  located. We went to a seemingly slum area where we visited a host of his friends among the hoi polloi such as the lowly bystander, a street hawker, a barangay tanod, a cockfight owner, etc.

6 – In March 1945, the City of Manila was heavily bombed and strafed by the US fighter planes as those Japs who were holding out in the city then. 1945 was Year of the Rooster.

7- The Japs  considered Manila as their  last  fortified stronghold and it was then at the verge of being overtaken and re-conquered by the US-Allied forces which eventually materialized.

8 – Girth has that archaic meaning of being encircled.

9-  Crock is slang term which means a drunkard.

10 – Mon Maronilla, Jr. is Kumpadreng Mon’s eldest son, RAMON F. MARONILLA, Jr.,  who is a top officer of the J. P. Morgan Bank based in Hongkong.

11-  LECHON is the Filipinos’ popular feast food, a roasted pig with an attendant sauce with ingredients consistin of ground liver, etc.

12 –  WILLIE NEP is Willie Nepomuceno who is a comedian-actor, known for Ispup (2000), The Guerilla Is a Poet (2013) and Black Mamba (1974). He is a comic impersonator whose skill as such impersonator was recognized during the anti-Marcos rallies. WILLIENEP is now considered as the country’s master impersonator as among the Filipino personalities he impersonates include the following:  the late strongman Ferdinand Marcos, Joseph Estrada, Fidel V. Ramos, Dolphy, Gringo Honasan, Ping Lacson, German Moreno, Nur Misuari, and Fernando Poe Jr. In the international front, he usually copies Stevie Wonder, Paul Anka, Tony Bennett, ‘Nat ‘King’ Cole’ , Frank Sinatra, Sammy Davis Jr., Elvis Presley, Bruce Lee, and even Superman.]