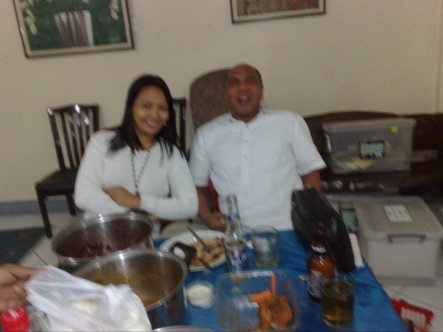 [JOVY aka JOVITO B. GAMBOL is shown here together with a guest, Ms. WENG DEGLISON, during the Law Office’s CHRISTMAS party in December 2010. HAPPY 57th BIRTHDAY JOVY!!!! It would appear somewhat serendipitous that this is my 75th FUN-RHYME blog while Jovy will celebrate his 57th birthday on March 14, 2017.]

He is a TRUE-BLUE BATANGUEÑO1,

And is not a supporter of MIKE SUEÑO2;

Neither is he in favor of DIGONG3,

For he’s for MAR ROXAS4 all along!

And never ever speak of that DENOMINATION,

Which just got involved in some ALTERCATION;

For he truly feels that it’s just a CULT,

Which is amassing CASH into its VAULT!

But he has shown his true SINCERITY,

His clients have admired his nice INTEGRITY;

Instead of creating dispute between warring SPOUSES5,

He even counseled them to bury the AXES6!

He has shown his true job DEDICATION,

Even working on Sundays with much VOCATION;

And he has helped his siblings’ RELATIONS,

Gifting them even with costly COMMUNICATIONS7!

He has remained as though a man of the CLOTH8,

As he has ignored and cast out his desire to be BETROTHED9;

Perhaps, he wanted to help as many KIN;

Instead of just a wife and his own CHILDREN!

The life of JOVY is truly COLORFUL,

It has its UPS — and DOWNS just like a FALL;

But even though he has once FALLEN,

He’s RISEN up and he never felt so CREST-FALLEN!

And his lawyering has carved a NICHE,

He has drawn swords even against the RICH10;

For his advocacy is to truly help the OPPRESSED,

And as JOVY is almost reaching his SENIOR year,

Though it’s not some kind of starting a VICE,

It’s just to salute a YEAR that truly was NICE! 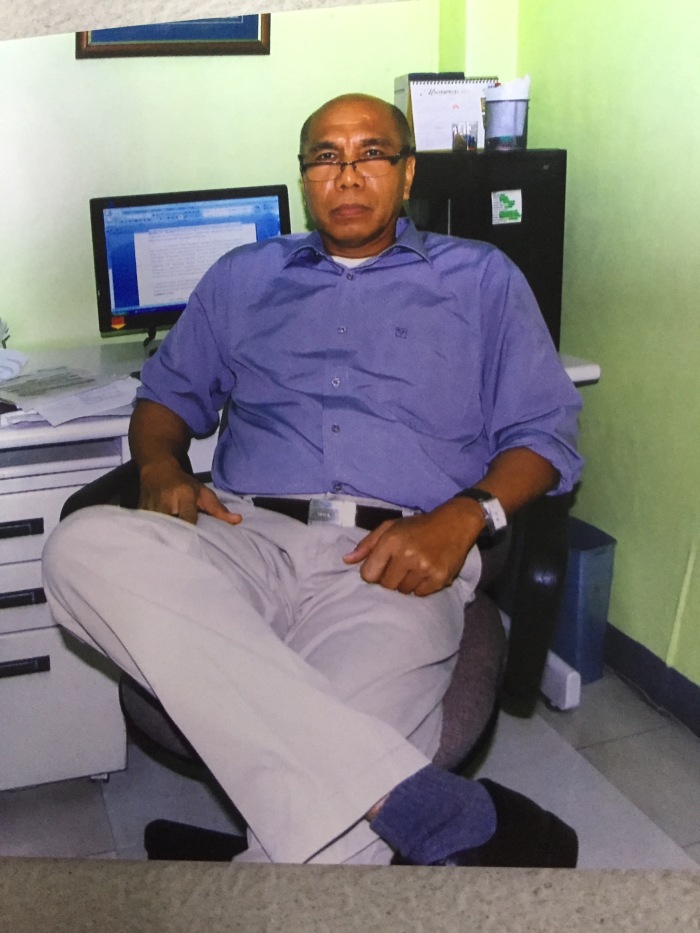 [Photo of the the BIRTHDAY BOY, ATTORNEY JOVITO BAUTRO GAMBOL, taken at his work station.]

[Legend: 1 – JOVY is a native of Batangas City and is a resident of SIMLONG.

4 – MAR ROXAS was the standard-bearer of the LIBERAL PARTY during the 2016 Presidential elections; and Jovy drew his lot in favor of MAR ROXAS winning the polls.

5 – Jovy was engaged by a wife who has caught her hubby doing some hanky-panky. Well, instead of firing up the enmity in the wife’s broken-heart, Jovy patched up the quarrel and the spouses were so grateful to Jovy for his peace-making spiel.

6 –  The idiomatic expression actually is “TO BURY THE HATCHET” when one does a peacekeeping chore. The phrase “BURY THE AXES” was used for the purpose of achieving RHYME considering that a HATCHET is actually an AXE.

7 – Jovy reportedly gifted one of his nephews with a Php 14,000.00 peso-worth cellphone and is paying for the matriculation even of a score of his grandnephews, actually the grandchildren of his siblings.

9 – BETROTHED is to be engaged or to be pledged in MARRIAGE.

10 – Jovy’s string of cases where he would customarily serve on a PRO BONO basis  consists of cases of LAND DISPOSSESSION between rich landowners versus the tenants. And JOVY will almost always be CHAMPIONING the cause of the lowly tenants.

11 – Though Jovy is a TEETOTALER, as he seldom drinks alcoholic beverage; a sip of BEER perhaps would be worth it to celebrate the wonderful year that has passed.]