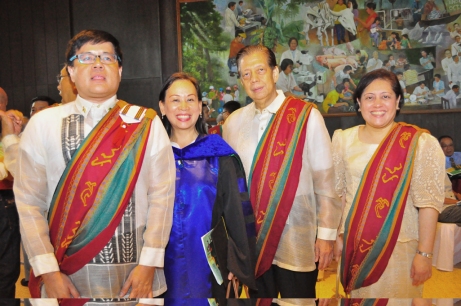 [At left photo is Atty. Ramon M. Maronilla (third from left) during the 2015 Induction of new members of the UP Alumni Association (UPAA) taken at the UP Los Baños in 2015. My friend Mon Maronilla is the incumbent President of the UPAA and will serve as Prexy up to and until 2018.  At right photo is the duo of Atty. Maronilla with his beauteous wife, Ms. Becky Fong-Maronilla, as they are seated side-by-side during one of the social events they attended at the Manila Polo Club in early January 2017.]

The J. J. is for being JUDICIOUS and JOLLY,

Though it may sound like JEJEMON1; what a FOLLY;

But my FRIEND MON MARONILLA indeed, is at times crazily FUNNY,

So, JEJEMON would  seem as a close SOBRIQUET.

When you’re a close friend of HIS, you’ll surely be CAPTIVATED,

And with his attendant facial expression,

When he distends his eyes to express SURPRISE,

Or creates those creases in his facial lines;

He’d act as though a seasoned ACTOR,

But when he is in his serious MOOD,

You’d virtually hear the wisdom of a LORD;

He’ll truly advise and counsel you in SYNCH,

Golden nuggets will pour from his sagy mouth, that’s a CINCH.

And when he analyzes a court CASE,

He’d exhaust all the angles as though cascading through a MAZE;

Thus, his reliance unto his common sense PANACHE3,

And he’s in fact so truly HUMBLE,

Though he’s gotten the knack of getting clients out of  TROUBLE;

For he’s a SAGE SIMPATICO4 and inordinately TACTFUL,

As a client, you’d never ever feel to be DOUBTFUL!

But when he got scheduled for a MEDICAL PROCEDURE,

He told me that he’ll just get some kind of a PUNCTURE;

For it will not run like the orthodox MODE,

It will be ROBOTICS5, that’s what is in VOGUE!

And as he happily and earnestly narrated,

His entry into the OR6 was like he’s truly top-rated;

With beautiful nurses smiling and cheering,

But the entry of the ROBOT started his chilling!

But as the doctrine of doctors that gave him attention,

Where experts in their field, without any question;

J.J. Mon was superbly appeased and so pacified,

All the chilling and fear was lost, J.J. Mon got satisfied!

And now in his recovery period,

He feels as though he’s so truly soothed,

He has promised to play badminton

As has been his mark in the battledore8 COURT,

He’ll smash and strike the cock9 with a playful SNORT.

And when the centennial of the UPSILON arrives,

He’ll march through the aisle with

his BROD DANNY10 on his side;

It would truly be a DOUBLE CELEBRATION,

For it would certainly be a top-level FIRST,

With J.J. Mon as the UPAA Pres;

While Hon. Danny Concepcion as UP President,

It’s a unique achievement with no such precedent.

Your badminton playmates are awaiting your return,

Unto the BADMINTON HALL eagerly looking for an overturn;

When you’d have arrived, you’ll be the real and true CHAMP!

GET WELL SOON OUR BADMINTON CHAMP!!!!

[Legend: 1- JEJEMON is a slang street lingo which connotes the thought of being CRAZILY FUNNY.

2- HD means HIGH DEFINITION television, actually, it is a television system providing an image resolution that is substantially higher than that of standard-definition television.

3- PANACHE  is a word of French origin that carries the connotation of flamboyant manner.

5- ROBOTICS SURGERY   or robot-assisted surgery, allows doctors to perform many types of complex procedures with more precision, flexibility and control than is possible with conventional techniques. Robotic surgery is usually associated with minimally invasive surgery — procedures performed through tiny incisions.

7 – OPIOID is used here as that natural form of OPIOID which comes long with ENDORPHINS that are emitted naturally via its production in the central nervous system and the pituitary gland. They have the same pain-killing effect like morphine and provides a general feeling of euphoria.

8-  BATTLEDORE is another term for BADMINTON as a kind of sport.

9- COCK refers to SHUTTLECOCK which is used as some kind of ball in a badminton game.

10- Brod DANNY is incumbent UP College of Law Dean, Danilo Concepcion and the incoming University of the Philippines President who will take his oath this February 20, 2017 following his election by the UP Board of Regents. 2018 would truly be a significant YEAR for the UPSILON SIGMA PHI as both incoming UP President Danilo Concepcion and incumbent UPAA President Ramon Maronilla are illustrious members of the UPSILON SIGMA PHI and both of them will be reigning as Presidents (i.e. UP and UPAA) during UPSILON’s centennial in 2018.