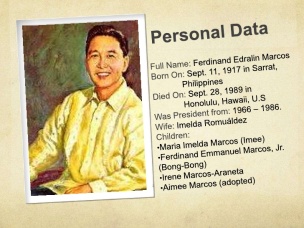 [President Rodrigo Roa Duterte has emphatically announced that his decision to allow the burial of the late President F.E. Marcos at the LNMB will neither change nor waver even if the anti-Marcos burial protesters would rally daily even for a year. He has even assured the protesters that they will have all the freedom and much leeway to stage their rallies in the metropolis’ streets  untrammeled and unrestrained. On the issue as to whether MARCOS is a HERO, Pres. Duterte said that HISTORY will judge MARCOS; and he would leave it to the historians to determine whether MARCOS is a HERO or NOT. Left photo above shows former Pres. Marcos engaged in a friendly, nay a casual, chat with the former’s frat brod NINOY AQUINO, as they are both members of the UPSILON SIGMA PHI fraternity, UP’s oldest fraternity.  Right photo above shows a painted depiction of former Pres. Marcos with entries respecting his personal data juxtaposed to the right of Pres. Marcos’ image.]

History pertains to a process, nay an annal;

‘Tis not reckoned by some kind of an event,

Even if it’s an elegant or grandiose or simple interment;

Indeed, it ain’t generated by some kind of burial.

Some people say F.M. is no HERO,

For my Dad himself joined WW TWO,

And he even bagged a Silver Star “DECO”!

And in the hills of Negros during WW2, ‘twas foretold;

That this intelligence operative named Andy*,

If it’s even admitted that his medals were UNTRUE,

His being a soldier and a war veteran is CUE;

For being a soldier and a war veteran— ‘tis a lot,

A hero ought to have fought a foreign rule,

And not just because he got killed and mangled;

For getting killed and mangled can’t be deemed a ferrule,

As though some kind of nexus, ‘tis nice thing to be GOOGLED.

And the lineage too is important,

Especially when there’s some sort of ERRANT;

For there’s one supposedly HERO,

Whose ancestor actually was an ANTI-HERO!

That that ancestor collaborated with the Japanese;

In fact, that ancestor got arrested as he flew to Hirohito’s nest;

And was imprisoned in Sugamo Prison, in Tokyo instead.

If  Marcos is TRULY not a hero in the hearts of many,

But BBM got 14 million votes PLUS, and still ASCENDING…

That would come when the COMELEC  starts the RECOUNTING!

The PANTHEON Law is very clear,

Even the AFP Rules is much more clear;

For just being a soldier and a past President,

The Law and the Rules limpidly allow interment.

President Duterte has made his point PLAIN,

He’ll allow the protesters until they become LAME;

And now the protesters root for EXHUMATION,

As though it’s just some kind of PEST FUMIGATION;

But in truth and in fact, those PESTS are not too many,

They are ONLY too NOISY and so “YELLOWY”!

[* “ANDY” is actually the nick name of former Pres. F.E. Marcos. My Dad, Maximo P. Young, who was awarded the SILVER STAR Medal by the US government for his war efforts in World War 2. recounted to me that in their intelligence mission-trips (after the Japanese forces have fully subdued and conquered the whole of the Philippines), his group has had various contacts with the group of former Pres. F.E. Marcos, as Pres. Marcos was under the NORTHERN-PHILIPPINE command headed by the late Amb. Roberto Benedicto, while my Dad was under the NEGROS command under the late Gen. Ernesto Mata.]

[** LNMB is acronym for LIBINGAN NG MGA BAYANI which can be roughly translated in English, as CEMETERY FOR HEROES. And this TITLE, nay acronym, started all the debate and protests against the decision of President Rodrigo Roa Duterte to allow former President F.E. Marcos’ burial therein. Pres. Duterte declared that he is just following the law (i.e. the PANTHEON Law aka Republic Act No. 289) which allows the burial of past presidents in the LNMB. On top of the aforesaid law, an AFP (i.e. Armed Forces of the Philippines) rule allows past presidents and even soldiers to be  buried in the LNMB.]