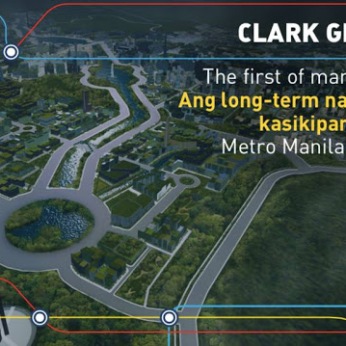 [Photo at left shows the artist’s perspective of the CLARK GREEN CITY project; while photo at right shows the artist’s perspective for the new CLARK INTERNATIONAL AIRPORT project. This duo of a FLAGSHIP project  of the DUTERTE ADMINISTRATION consisting of the CLARK GREEN CITY which comprehends about 9,450 hectares of land and the NEW CLARK INTERNATIONAL AIRPORT is aimed at decongesting the Metro-Manila area and of similarly solving the metropolis’ perennial traffic problem.]

For with a new airport at Clark, as site’s construction;

Traffic in Metro-Manila will have a bright solution,

As the airport is concatenated with traffic; truly there’s clear connection.

Per  Vince Dizon of BCDA, as culled from last year’s data—

Those are actually  motorists bound solely for NAIA,

But only 10 per cent of those came from Metro-Manila.

A new airport will rise in Pampanga at Angeles,

And it will be housed at  the Clark Air Base;

Those 90 per cent Northerners– no need to get into a traffic’s maze.

We really have a thinking administration,

For they continue to search for an apt  solution;

And by way of a complimentary variation,

A new green city will rise in our good nation.

It will cost the government 607 B;

A good development, for by next year we’ll see;

About 5 Million Chinese from Nanjing &  Shanghai; living near  Yangtze.

Construction of the airport starts next year,

By mid-2019, almost ready to receive those blazing brands of air-carrier;

It surely will be a nice edifice to see & a site to reflect,

It’s vaunted to be modernistic, with sure cutting edge effect.

Duterte-mania indeed has broken out of Manila,

For the ASEAN has picked him to be their CHAIRMAN-ah;

To solve their drug problem in their top KL city.

It will soon be good for the ASEAN summit,

As Manila would again serve as its next host indeed;

By then and surely then, when you count from one to ten,

Manila’s heavy traffic will no more be a problem.