[Philippine President Rodrigo Roa Duterte has just completed his FIRST 100 days in Office. With the highest expectation shared by the Filipinos in the promised change which served as centerpiece of his election campaign, he managed to score in the latest SWS survey, an overall  76 per cent approval rating and 84 % approval  rating with respect to the manner how his anti-DRUG campaign is being implemented. In his recent speech delivered in Davao City yesterday (October 7, 2016), he expressed disgust on how the US and EU have censured his ANTI-DRUG campaign which is primarily focused on saving the Philippines (which according to DU30 has transmogrified into a NARCO-STATE) from the very scourge of DRUGS; while lauding China for its help done SUB ROSA, of putting up a vast DRUG rehabilitation facility in Fort Magsaysay, Nueva Ecija. Below is a FUN RHYME BLOG to celebrate DU30’s 100 days.]

Have surpassed all of those before seen,

While INTERNET speed has zoomed in.

While ratings have remained PASSING!

Duterte graded himself with TAME,

A modest picture; a humble mien.

A sense of discipline has dawned      indeed;

For bureaucrats have grown alert,

Eschewing graft; and casting out fat…

The END of ENDO in gov will be exact.

The FOI measure got promulgated;

Though it was just via executive edict,

It showed a commitment to transparency;

A healthful recourse to stop the ruckus.

As talks with Reds untangled some skein,

The MORO rebs will soon be next;

A halcyon nation sans any protest.

Even the storms have skipped Manila;

The seat of power; hub of Duterte- mania,

But traffic remains to be some hard nut—

Which Sec. Tugade has yet to crack! 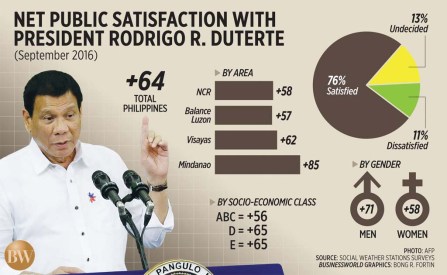