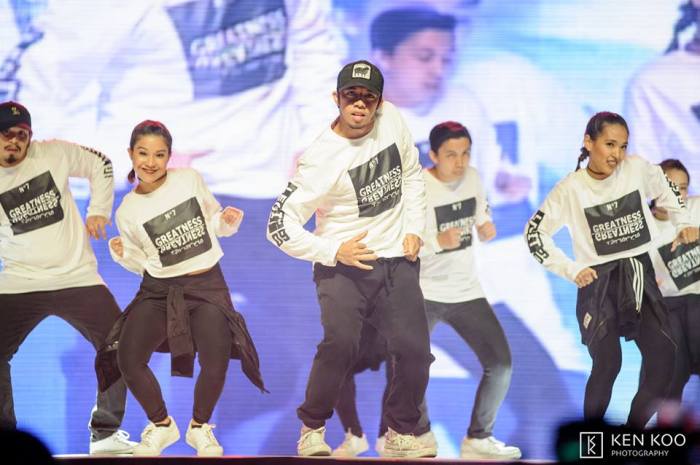 [Top photo taken at the UAAP Streetdance Contest shows Cheska “killing it” via a hiphop dance number at extreme left; while Alee is at extreme right. Photo below shows Shayna, 2nd from left with Legit Status par excellence COACH Vimi Rivera, to Shayna’s left, as they performed as guest dancers thereat.]

UP garnered the championship trophy once again, making thereby the UP Street Dance Team, back-to-back champion. The UP Street Dance Team is close to the hearts of my daughters Shayna and Cheska (who are co-managing the Groove Central Dance Studio) as they were once members of this elite coterie of top-notch terpsichoreans.

In 2006, Shayna with eleven of her other UP Street Dance Team co-members first joined the World Hiphop International Contest (WHHI) in Los Angeles, USA. They resolutely endeavored to bring the bacon home, so to speak. But they never got lucky in their first try. In 2012 however, the UP Street Dance Team under their stage name, THE CREW, which was composed of a band of UP Street Dance alumni members was crowned as Champion in the Adult Division of the WHHI then held in Las Vegas, USA. Once more in 2013, the UP Street Dance Team with Cheska as team member was adjudged as Runner-Up in the Megacrew Division.

Back at the Groove Central, preparations are being done for the 2016 Summer Dance Workshop and ENROLLMENT now is in FULL SWING. And they, my daughters are now as BUSY as a BEE. While before, almost all classes were focused on HIPHOP; this year BABY BALLET will also be part of the curriculum. Thus, all of my DANCING DAMES  will be busy imparting their terpsichore knowledge/skills unto their students with Shayna focusing on advance hiphop, Cheska serving as TRAINING-COACH for the Toddlers Hiphop Dance  as well as KIDS HIPHOP Dance classes and Alee taking care of the BABY BALLET class. Though Alee has now concentrated in HIPHOP, she was a bemedalled ballerina clutching her first gold medal win in a solo ballet performance in Singapore in 2006. Alee’s grand harvest of gold medals in BALLET was in the Bangkok International Dance Contest in 2009 where she earned a total of SIX (6) medallions.

Back to HIPHOP at the Groove Central…well, in HIPHOP there is some kind of a dance movement known as a CRUMP or KRUMP. Though, I am not much in the know in HIPHOP, I think, as far as I know vicariously is some kind of a contortion-dance move, some kind of making your body look like as though it is being crumpled. Well, mimicking thereby ring announcer Michael Buffer’s popularly catchphrase…LET’s GET READY TO CRUMPLE!!!