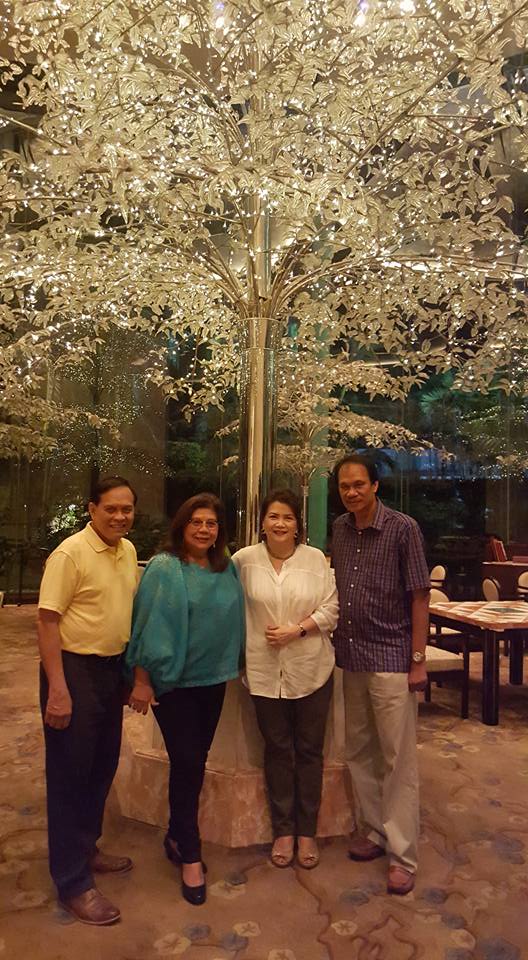 [Photo was taken inside the Yarakuen Restaurant at the Manila Diamond Hotel with Ambassador Extraordinary and Plenipotentiary, H.E. Victoria Sisante-Bataclan, on January 17, 2016. From left to right: myself, Amb. Bataclan, Atty. Babes Navarro, and Atty. Cel Gellada.]

Atty. Ma. Loreto “Babes” Navarro sent a text message in the afternoon of January 16, 2016 (Saturday) while I and the members of our clan were all preparing for the wedding of my eldest nephew, Woodrow aka Woods, with his pretty beau Pam Unite.

Babes may have felt that I was preoccupied for which reason, she sent the message anew. Babes text message notified me that she just discovered that our UP Law classmate who is based in Brussels, Ambassador  Vicky Bataclan is in town and that she has talked to Vicky and that Vicky has suggested TWO (2) dates for a dine-meet, either on the Sunday (January 17) or Tuesday (January 19), of the week.

I texted back and said that I will be attending the wedding of a nephew and that I will be preoccupied as I had to stand-in as proxy to a principal sponsor who called in sick.  Babes however continued her text messages until the following day and as she has confirmed that Vicky would be free on that Sunday, she said that we will just ride together in her car: Babes, myself and another classmate of ours, Cecilio Gellada (“Cel”).

As pre-arranged, we cruised together on board Babes’ car to the Manila Diamond Hotel along Roxas Boulevard. Babes  and Cel fetched me at my Cubao Law Office (as I was rushing some pleadings deadlined on the following day) and as it was a Sunday, not much traffic on EDSA, we arrived there at around 6:45 pm (late by 15 minutes, as the appointed time was 6:30 pm). It was a great and sumptuous meal of grilled salmon and a thrilling zest of an intense burst of fruity red wine. It was a night too of reminiscing our nostalgic past; the professors, the classroom activities and our extra-curricular outings. But the more exciting stories, were those about Vicky’s escapades which she did not permit me to publish in this blog.

Looking back, I remember Vicky as a feisty student leader-activist during our undergraduate days at UP Diliman. I did not know Vicky then personally, but she was a campus figure as she got elected as University Councilor under the Chairmanship of Ericson Baculinao in 1970-1971. Vicky was a real looker during those days when student activism was the IN thing. At that time, Vicky’s signature attire, which reflects her activist stance, was an indigo denim jacket with matching denim jeans. And when Vicky speaks out her mind during mass assemblies in rallies and demonstrations, she surely sounded like a “rabble-rousing revolutionary”, just like a female Che Guevarra, so magnetic and so beguiling.

When I entered UP Law in 1974, Vicky was not part of the evening section. However, on the following year, Vicky emerged as I learned thereafter that she went on leave from UP Law and has decided to continue her law studies.

I remember that I and Vicky would customarily meet accidentally at the Bonifacio Circle in Intramuros, Manila. We would be usually waiting and catching a JD bus to bring us to UP Diliman. I was then working at the Tondo Foreshore Urban Renewal Project which was at that time, under the auspices of the Office of the President until it got absorbed later by the National Housing Authority. Vicky was then connected with the NEDA, an acronym for National Economic Development Authority, at its South Harbor office near the Customs zone.

As always, Vicky and I would be perusing through our thick law books while on board the JD bus throughout the ride. And at times when the JD bus is full, I will be standing holding on to the wooden stanchion with my right hand, while cradling the hardcover on my left hand.

I and the rest of our batch mates of UP Law 1979 are so happy for Vicky as she eventually became Ambassador Extraordinary and Plenipotentiary, a pride and honored joy of the UP Law 1979 evening batch.

It was almost 40 years ago, when Vicky started her career as a diplomat after having topped the Foreign Service Officer examination. But Vicky’s past affiliation with a militant student organization during her UP undergrad years, the Kabataang Makabayan, more popularly known by its acronym KM; proved to be some kind of  an obstacle. The then National Intelligence and Security Authority (now, the National Intelligence Coordinating Agency) was not keen at issuing Vicky a clearance ( a must then during the martial law days, prior to one’s bagging a government appointment as a diplomat).  But fate indeed shone brightly upon Vicky, and she eventually got the consular post which Vicky has been aching for.

Prof. Ramon C. Fernandez is a very astute professor in UP Law, who was the class valedictorian of UP Law Batch 1939 and who placed second in the 1939 Bar exam which former President Ferdinand E. Marcos topped. It became Prof. Fernandez’ practice to bring to Malacañang the students of his UP Law Remedial Law Review class to dine and wine with Pres. Marcos. And Pres. Marcos would always look forward to this opportunity to hobnob with bright, youthful and promising UP Law students in a night filled with feasting, wining and dancing.

Vicky joined the party and was able to snatch a chat with Pres. Marcos through the aid and intercession of Prof. Fernandez. And Vicky saw this as an opportune moment to bring realization to her dream of becoming a true-blue diplomat. Vicky came in prepared, as she earlier crafted a letter addressed to Pres. Marcos seeking aid and succor for her eventual appointment as a first grade consul. Upon Prof. Fernandez’ personal endorsement, Pres. Marcos scribbled out a marginal note to the then Department of National Defense Secretary Juan Ponce Enrile, and from then on, Vicky begun her diplomatic career rising to the ladder of success and attaining the highest rank in the Philippine diplomatic community as Ambassador Extraordinary and Plenipotentiary to Belgium, Luxembourg and the European Union.

During our sumptuous dinner at the Yarakuen, Vicky narrated to us about the plight of a Filipino seaman who got into some kind of a legal complication which thereupon required the need for the services of a Belgian lawyer. As Vicky dispatched one of the embassy’s staff to look for a Belgian lawyer, it was pure serendipity that as this embassy staff member  walked and milled around a favorite venue where Belgian lawyers congregate, a favorable development ensued.

After knowing that a Filipino seaman badly needed the professional services of a lawyer, the Belgian lawyer volunteered his services pro bono on the condition that upon his future trip to the Philippines, he be afforded  the chance to meet our Pambansang Kamao, Manny Pacquiao. And the Belgian lawyer clearly proved that he is worth his salt as he easily kept and tended our Filipino compatriot from harm’s way.

This February 2016, as Vicky is making preparations and is looking forward to the Belgian lawyer’s trip to the Philippines; Manny Pacquiao hugely needs to make his appearance. And that momentous occasion will be delved into, in the next chapters in this BLOG SITE…