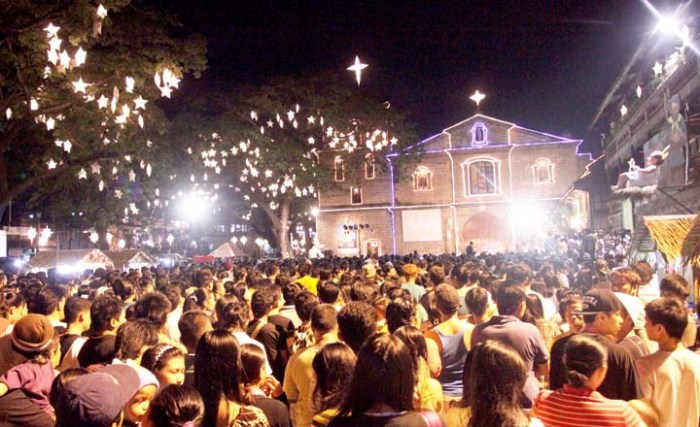 Christmas in the Philippines is truly unique for which reason most Filipinos abroad would almost always insure that they are booked for a homebound flight to the Philippines when the Yuletide season sets in. And the Christmas season in the Philippines is the longest, as after All Saints’ Day on November 1, families would unfailingly start to bring out for lavish adornment and decorations,  their Christmas trees while embellishing their home’s façade with sparkling and twinkling Christmas lights, which will be kept twinkling at night until New Year, and even beyond. In the rural areas, as the Feast of the Three Kings  has been traditionally celebrated on January 6 (despite a change in the date of celebration to the first Sunday of January, as has decreed by the Roman Catholic Church), January 6 still stands as the end of the Yuletide season. Thus, Christmas season “officially” ends for the country’s hoi polloi on January 6 especially in the provinces, as the old folks still consider that it is opportune to practice the giving of gifts on that day, to identify with the Three Kings’ gift-giving journey to the child Jesus.

This hurry and scurry tempo of activities would come about as people from the metropolis will be so excited to reunite with their families in the provinces while those who may have been assigned in the provinces for work would return to the city for their family reunions. Furthermore, December has also become a favorite month for weddings in the Philippines.

And in planning the Christmas party in the office, it is always assured that everyone would be present to join in the festivities which are usually capped with an exchange of gifts. In most offices too, they would even have the KRIS KRINGLE exchange of gifts starting from the onset of the first week of  December.  Lots would be drawn in the first working day of December and everyone is secretly assigned to give a token gift to his MONITA or MONITO (i.e. the gift’s recipient) depending upon the nature of the gift that is required to be given. Examples would be: SOMETHING SOFT, SOMETHING LONG, SOMETHING HARD, etc. until the Office’s Christmas party where the gift-giver would reveal oneself to one’s monita or monito.

Indeed, office work mostly in the government sector, turns into a slow down as Christmas approaches and usually, hearings in court would generally be held until December 15 or 18 ONLY. And lawyers, like me, would invariably avoid going to court after December 15 as it would almost always be a run through a gamut of Christmas parties from one court sala to another. And either you will partake of food to maximum satiation or that you are expected to bring at least a native round basket called “bilao” of noodles usually PANCIT which is traditionally a customary food-gift as it supposedly augurs well for long life and prosperity.

Among the more religious families, they would embark as a family in attending the NINE (9) misa aguinaldo masses or the simbang gabi masses from December 16 up to December 24. Every Catholic church in the whole archipelago will be sporting a BELEN (i.e. the NATIVITY scene of the Child Jesus complete with Mother Mary, Saint Joseph and the Child Jesus lying in a manger) near the altar during the Christmas season.

The origins of the simbang gabi is sketchy but it has been said that during the Spanish regime, the Spanish clergy started this tradition of holding the early dawn novena masses from December 16 to December 24. It was said that it was done to accommodate the farmers who would go to the rice fields to till and work in the rice paddies, so early in the morning to avoid the sweltering heat of the noon day sun. Thus, it has been narrated that the 4:00 AM mass was started during the Christmas season of yesteryears just as to allow the farmers, time to attend the holy mass and thank God for the blessings that they have received for the year. And this tradition lives on until today.

And what is most amazing, even though those attendees to the early morning mass at 4:00 AM (meaning that by 3:00 AM one has to prepare for church) are almost  always  benighted (having arrived home around 12 midnight or in the wee hours of dawn, from an office or a friend’s office Christmas party), they, especially the teens who would want to be in the company of their friends at those early dawn masses, would really strive hard to attend all the NINE (9) masses. Those church-goers are sometimes sleepless as they would even come to church to join their respective families straight from their own Christmas parties with friends and office mates. And as almost all of the churches would be filled to the rafters, some of the more enterprising devotees/mass-attendees would usually bring with them foldable stools.

After the “simbang gabi”, in the olden times, the family would partake of an early morning meal  consisting of either puto bumbong (which is a native delicacy which comes in rolls of violet colored rice cakes about 4 to 5 inches long and which is cooked via steaming inside a thin bamboo stem) or bibingka ( another rice cake which is round-shaped and is cooked via a makeshift tiny oven using bricks of burning charcoal as heat generators).

With this modern age of fast-food chains, families would now take their early morning meals either at McDonalds, Jollibee, Pancake, Shakeys, Army & Navy, etc. This early morning gatherings add to the lost opportunities to take meals together and more so of family bonding, as everybody would be so busy at Christmas time shopping and/or rushing and cramming to finish a year-end report or other school or office related chores.

During all those Christmas parties, parlor games would be played and year after year, the creativity of the Filipinos has always been honed to the hilt as new and more exciting parlor games are crafted. Indeed, everyone in the Philippines during all those Christmas parties would turn like little children doing and playing seemingly foolish pranks and horseplay. One among the favorite parlor games is that one which involves the use of eggplants and eggs. The competitors would try to move the egg from the starting line to the finish line by nudging (and trying to be cautious not to break the egg) the egg on the floor, using the eggplant which is tied via a string from the competitor’s waist downward as it dangles towards the floor.

But what I usually await during the Christmas season is the homily which is delivered at the Chapel of the Parish of the Holy Sacrifice at the University of the Philippines-Diliman Campus (where my family hear mass every Sunday) by a Filipino guest-priest named Fr. Ferdie Santos, who though assigned as an Associate Professor at the St. John Vianney College Seminary in far-off Miami, Florida, U.S.A. would annually vacation here on Christmas to reunite with kith and kin. His homilies are so much applauded as these homilies focus on day-to-day issues that confront us in life. Fr. Santos’s homily on Sunday (i.e. January 3, 2016) was on how to successfully combat insecurities in life as he underscored that each of one of us, is unique as God made out a wonderful and unique creation of each and every one of us.  But the most applauded of his once-a-year homilies is that which he delivered last year at UP which centered on the subject about no such perfect family in this world. And that in closing the homily, Fr. Ferdie punctuatedly counseled us all to deeply love our respective families despite the imperfections of some of our family members.