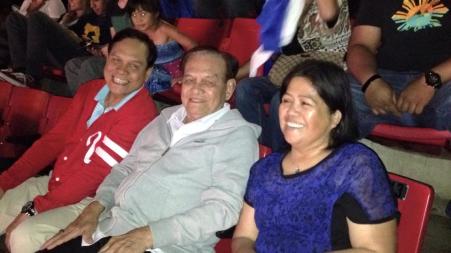 [The photo above shows Daddy Max at the center with me to his right, and my maternal cousin Alma to Daddy Max’s left]

When I and Daddy Max went to the US in August of this year, one of our purposes aside from watching the 2015 World Hiphop International Contest in San Diego, California is to visit his father’s tomb, our Lolo William, at the Santa Clara Catholic Cemetery in Santa Clara, California, USA.

We accomplish that mission of visiting Lolo William’s tomb (the second meeting for Daddy Max and Lolo William, as their first  and only meeting, in the flesh, happened in 1938 in Cebu City, Philippines) , and on top of it, we were able to meet and bond with Aunt Aida Young-Breslin (“Aunt Aida”) who lives near the Santa Clara Catholic Cemetery. It was Aunt Aida who opened the door to Daddy Max 77 years ago (their first meeting), at their Cebu City home in the Visayas region in the Philippines; when Daddy Max started his trek towards finding his roots at age 16. And this is how Daddy Max came into this world…

Daddy Max was born on July 30, 1922 in Toledo City in mainland Cebu. However, Daddy Max spent his childhood in Opon which is now called Lapu-lapu City,  the very place which became the venue of Daddy Max’s beginnings in life. While Toledo City is one of the cities of Cebu which is on the western seaboard facing the island of Negros Oriental, Opon was on the extreme eastern end facing the island of Bohol. This big leap from the western section of Cebu to the east seemingly depicts the transformation of Daddy Max as a son of a Caucasian Westerner to an Asian life of sea, forest and artless simplicity.

The biological parents of Daddy Max are William Young, an American soldier who was part of Admiral Dewey’s fleet, and a Visayan lass who has roots from the present Ozamis City in Mindanao, but was then domiciled in Toledo City, by the name of Emilia Purisima.

As Lola Emilia could not sustain life as a single parent considering that  Daddy Max was born out of wedlock, Lola Emilia decided to put Daddy Max up for adoption. And this act of putting Daddy Max for adoption brought Daddy Max to the town of Opon, now Lapu-lapu City.

The Mariñas spouses were industrious and frugal and they belong to a middle-income family and as there was  no problem with their living and economic conditions then, Daddy Max was living in relative comfort.

The Mariñas household were Daddy Max was part, lives in a two storey building made of strong materials along want is now known as Dimataga Street. The 2-storey house which still stands today and is near the foot of the old bridge (as there are now two (2) bridges) which links Mactan Island to mainland Cebu, though this bridge was not existing at that time of Daddy Max’s childhood. Food was in abundance in the  household as the Mariñas family was living along the seashore, where aquatic products were plentiful. In front of our two storey house was a farm of assorted fruit orchards, and which is also planted with corn. Corn grits cooked like rice was the daily cereal back then by the people of the Visayan region, and not rice which was the usual cereal consumed by people in Luzon.

Daddy Max was actually living with a relatively well off family. During those time in the early 20’s, the source of electrical power of the whole town of Opon was coming from a big power plant built by the early American settlers, and which was principally put up for the purpose of milling copra (i.e. a form of dried coconut meat which if further processed would produce coconut oil) and for the purpose of exporting copra abroad. Yet, despite the presence of this crude power plant, the practice of using lamps fueled with petroleum called PETROMAX, was prevalent. During those times, the use of electricity was strictly limited for radio usage and house lights ONLY, thus there were no streetlights then.

As is usual in almost all the towns in the Philippines back then, there were plenty of games and activities among the growing children back then in Opon. Daddy Max together with his childhood friends among whom is Tia Nene, a niece of the Mariñas couple and  a tomboyish lass who was of the same age as Daddy Max, would usually do a lot of singing at night. Aside from this nocturnal crooning, Daddy Max and his friends would play games like “patintero”, hide and seek, and story-telling. At daytime, especially during vacation time when the children are without classes, the group would go bird hunting into the forested area of Opon. But when the rains would catch up with them while on their way to go bird-hunting,  the group would instead gather fruits from hitherto unknown publicly-owned areas of fruit orchards in the forest and bring bunches of fruits  home, instead of birds or wild ducks. During that time, birds were aplenty in Mactan island as the area was forested and very much pristine.

Living near the seashore provides healthful and salutary conditions as well as fun-filled opportunities, as the children of Opon would usually go swimming with friends and the usual routine would be to catch various kinds of fish and crabs. In summer, the free time occasioned by the absence of classes, Daddy Max with his coterie of friends would go from one village to another. And as they hopped from one village to another, they would usually bring along boxing gloves and try to seek out from other villages their “barrio/village boxing champion” and fight for a prize via fisticuffs, to find out who has a better group of boxers in the whole town of Opon.

In summer also, especially in May, the Santacruzan (i.e. a flower festival dedicated to Mother Mary) would be celebrated. During this flower festival, there would be various amateur singing contests where music lovers would participate in singing their hearts out as well as acting out in plays and dramas. This kind of celebration is a special occasion which is held yearly and is looked upon with expectant joy by the youth.

From childhood up to his early teens, Daddy Max would always be participating in those singing contests. Luckily, Daddy Max  landed as one of the singing contest champion in Opon for which reason, Daddy Max was sent to try to participate in the PURICO contest (i.e. PURICO is a brand name of a popularly-purchased lard used for frying and is a product of Procter and Gamble, Philippines) in Cebu City where Daddy Max was declared the winner for one month as another set of singers would come in to participate for another competition period.

In those nightly outings into the sea, to where the children of Opon have customarily gone, they would similarly go trawling for different kinds of fish, using a lighted bamboo stick as a means to hunt the fishes. All kinds of fish would want to get near the light and so the fish was easy to catch. In those nocturnal activities, Daddy Max would always complain as though they are out of luck to catch the crabs as the crabs are fast swimmers, while the fish when glared by the light becomes easy target for their hunting.

As far as things were then going, Daddy Max was gradually becoming the darling of the Mariñas clan, as Daddy Max not only was possessed with a very nice voice which Daddy Max would pleasurably employ in singing to entertain them all. So, it came to pass that Daddy Max was in constant demand by the teachers at the school and the old folks and sometimes by the whole crowd in Opon as their master entertainer.

Most of Daddy Max’ activities as a child could have been concentrated along the sea shore which is near the 2-storey house of the Mariñas couple and the farm where Daddy Max would uncontrollably enjoy picking fruits with some close friends as the fruit orchards are just across the Mariñas house. Daddy Max’s friends would almost always instigate him to lead them in the “farm-raids” as the farm was big enough and there were plenty of assorted fruits there.