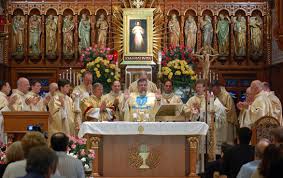 On April 4, 1999, I and Fr. Bernardo Blanco hied off to Europe via Air France. I was so excited as it was my first time to come to Europe. Our itinerary was all the more exciting, as we will have an almost whole day lay over in Paris from 6 AM to 8 PM; then a couple of days in Rome and finally in Madrid, and our ultimate destination in Ceadea de Aliste in Zamora, a province located at the northern part of Spain bordering Portugal. But what proved to be exciting and incredibly so, was my extraordinary experience in Rome.

When Fr. Blanco invited me to come with him to Europe actually to his motherland, Spain, he told me that I have to bother only with respect to my airfare and he will take care of the rest. The invitation came to me when Fr. Blanco during one of our bible reading sessions in K-Ville narrated to me that he is entitled to a triennial sabbatical, meaning that after every three (3) years of priestly work in the Philippines, he can visit his kith and kin in Spain. Actually, Fr. Blanco said that I will have the opportunity to lodge and board in those Claretian communities in Rome and in Spain.

As we had almost a day to spare, we took the liberty to roam around Paris particularly the Eiffel Tower. the Cathedral of Notre-Dame and the Louvre Museum. We were excited to see at the Louvre but it was unfortunate that it being a Monday, it was general cleaning day for the Louvre, for which reason, we were not able to enter into the Louvre.

When we left the Charles de Gaulle airport in Paris for Rome, we arrived at the Fumicino airport in Rome at around 10 PM. Thus, I never had the chance to be formally introduced to the Claretian community in Rome, particularly housed at the Provincial Generalate located  at the Via Sacro de Coure de Maria 5 in Rome’s Parioli District.

Upon arrival at the Claretian Generalate, and after we were showed to our respective rooms, Fr. Blanco celebrated mass with myself as the only other participant. Thereafter, we took dinner at the refectory with a plump Italian matron assisting us and as we parted ways to repair to our respective rooms, Fr. Blanco told me that we will meet at exactly 5:30 AM of the following day at the chapel for the morning prayers.

I was so excited as it was my first night in Rome and I hardly slept a wink. When dawn came, I and Fr, Blanco went to the chapel and there we saw the rest of the Claretian community lodging at the Generalate, composed of about 30 priests coming from all over the world: Argentina, Africa, Spain, Peru, Dominican Republic, etc. The priests were either wearing cardigans, sweaters, jackets or coats. While I was wearing a coat as the climate was cool in Rome at that time, I descried a tear in Fr. Blanco’s cream-colored sweater but he just ignored it. As the members-priests of Claretian community then staying at the Generalate in Rome were  all then singing hymns in the Italian language, I opened the hymn book and joined the singing. After a couple of minutes, the Provincial General in the person of Fr. Aquilino Bocos appeared at the altar wearing a priestly vestment, the other Claretian priests ascended into the altar which was something of a pedestal with a rung of stairs starting from the chapel’s center aisle.

As the priests all ascended unto the altar, they formed a semicircle with Fr. Blanco stationed from the extreme left where I was sitting at one of the front pews, while Fr. Aquilino Bocos stayed at the center portion facing them all. As they were about to start the ceremony, one of the Claretian priests who was from the Dominican Republic noticed me still sitting at the front pew. The priest from the Dominican Republic went down the stairs and extended his left hand to me in invitation. I tried to crane my neck looking for Fr. Blanco for some guidance, but as Fr. Blanco, who was bit short in height, and being covered almost by the towering Spanish priests;  was already at the extreme end of the left portion of the altar, our eyes did not meet and I in turn, thinking that the priest from the Dominican Republic, might feel offended if I would not take heed of his invitation. Thus, I ascended unto the altar and got the missalette which was in Italian which the priest handed over to me.

I thought to myself that this was perhaps the customary way on how they entertain a guest.  I therefore just followed what they were all doing reading through the Italian missalette. When the consecration part came,  I only then realized that the Argentinian priest mistook me for a priest too. As I did not want to disrupt the ceremony by going back to my seat at the front pew, I went through the ceremony as I said to myself that I was then in the state of grace. After the ceremony, it was only then that the Claretian priests present that morning at the chapel, learned  that I was not a Filipino priest but a Filipino lawyer.

In any case, as plausible justification for the unintended gaffe, it can be said however that there is a close kinship between a lawyer and a priest. Indeed, in the medieval age, it was acknowledged that two (2) of the recognized cardinal professions of the world are that of lawyering and the other, that of the priestly vocation.